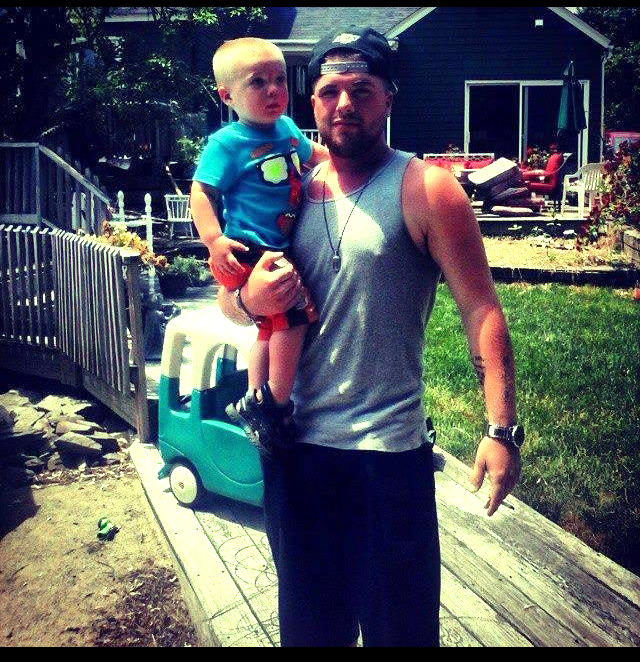 Tavis Marceau was a hard working family man putting in 60 hours a week for the moving company at which he was employed. He put in long hours so that he could provide a good life for his 2-year-old son, Aiden, the love of Tavis’ life and his whole world. Having grown up with little contact with his own father, Tavis put all he could into be a loving, caring, and present father to his own son. His friends and family say that Tavis always puts his family’s needs before his own. In June, Tavis’ world began to change dramatically.

It all began when he inexplicably passed out at work hitting his head that required stitches. It was believed, at the time, that dehydration caused him to pass out. Not long afterward, Tavis, a strong and active young man of 23, began to have difficulty walking and talking. On top of that, he was plagued with almost constant nausea and soon had to quit his job and move to Maine where his mother, Julie, lives.

For over a month Tavis was going back and forth between his mother’s home and the hospital enduring multiple MRI’s and CAT scans only to receive no answers. Eventually Tavis would lose his sight in one eye, have some paralysis on the left side of his body, numbness in his face and be riddled with uncontrollable laughing. He also had a great deal of difficulty talking. Finally, a spinal tap would reveal that he has Tumefactive Multiple Sclerosis.

What exactly is MS? Picture your nerves to be like wires covered in plastic coating. The coating around our nerves is called myelin. MS causes lesions that create breaks in a nerve’s myelin. Our brain sends messages via our nerves to other parts of our body to carry out particular functions. For patients with MS, when those messages cross these lesions, they never get to their destination causing the body to react in a number of different ways. Tumefactive MS lesions are more like round tumors rather than just bald spots in the myelin. They are aggressive, unpredictable, and have debilitating effects on the brain and body.
Tavis is currently undergoing a new plasma fusion treatment which takes out the ‘bad’ plasma and replaces it with healthy, new plasma. According to his family, he is having some very positive reactions to this treatment. He has some voluntary movement in his fingers on his left hand and has some in his left arm, as well. His legs are beginning to try to work and he can take a few “ugly” steps as Tavis calls them.

Once he is well enough, he will be moved to a rehab facility to concentrate on his recovery. In August he was told that the rehab facility would not accept him because he does not have health insurance due to his unemployment. This is when his family began raising money to help Tavis pay for his rehabilitation. In September he was accepted into the program.

Tavis’ main concern is with his son, Aiden. He wants nothing more than to get healthy, go back to work and continue to be the father he wants to be to his boy. His attitude is strong and his resolve unmoving. He has an incredibly positive outlook on his future and is meeting every challenge his new diagnosis throws at him with a fierce strength both emotionally and physically.

Nobody knows when Tavis can get back to being the hard working family man he longs to be, or what the future holds for him. He and his family are concerned that they will not be able to meet the increasing medical bills, or how long he will be kept in rehab because of his lack of health insurance. They have created a fundraiser to help Tavis. By going to www.giveforward.com and typing the name Tavis Marceau in the ‘find a fundraiser’ window, YOU can help by donating. They are trying to raise $10,000 but have less than $1500. Just like the ice bucket challenge I challenge EVERY Valley Patriot reader to donate anything you can spare to help Tavis get back on his feet again so that he can provide for and play with his 2 year old son again. Please help Tavis regain the life he desires and deserves.