By ValleyPatriot on February 1, 2017Comments Off on 48% of Doctors Would Let You Suffer to Please State Medical Board 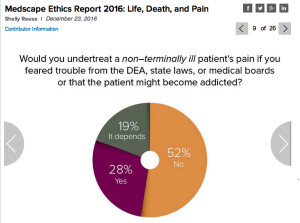 Medscape and other medically-oriented web organizations periodically conduct surveys of physicians nation-wide on various topics such as physician burnout, compensation, best places to work and so on. Around once a year the ethics survey comes out and is always worth examining.
One question from this year’s survey stood out to me. VP readers have read previously about how doctors traditionally have always let non-medical people dictate their professional decisions. Very few doctors historically have hung on to “their” profession in the face of societal or governmental pressure.
One such rare physician was Dr. Hans Creutzfeldt in Kiel who flat out refused to let other doctors murder his patients even though that was very much the in thing at the time. Amazingly he even managed to rescue patients from within the concentration camps. Very few doctors did that, though they could have.
Another was Dr. Hollo Ístvan in Budapest who personally saved a diabetic dissident playwright from being murdered by simply being locked into a hospital room without his insulin. Dr. Hollo happened to be walking by, smelled ketones, ordered the door open and sat on the patient’s bed for the next 14 hours to ensure he received proper treatment and survived. He of course was fired the next day and replaced by a loyal Progressive who would be sure to not do the same, but it is still Dr. Hollo that history remembers fondly.
Which brings me to the 2016 Medscape survey on physician ethics. Some bright person at Medscape asked the question:
“Would you treat a non-terminally ill patient’s pain if you feared trouble from the DEA, state laws, or medical boards or that the patient might become addicted?
Fully 48% of physicians said they would allow such concerns to play a role in how they would treat a patient in pain now.
Medscape did not split the question further into its two component parts: fear of the government, meaning fearing for your own self OR fear for the patient’s own future.
But ultimately it does not matter. About half the physicians reported that they would not treat a patient in pain NOW because of either concerns for themselves and their income or a vague concern that the patient “might” get addicted sometime in the future.
So there you have it. Despite hoodwinking us all with claims about evidence-based treatment and patient-centered care, in reality half of the doctors would not treat a patient in pain there and then before their eyes based on concerns that are not evidence-based or patient-centered.
Bharani Padmanabhan MD PhD is a neurologist who treats multiple sclerosis in the Boston area. scleroplex@gmail.com