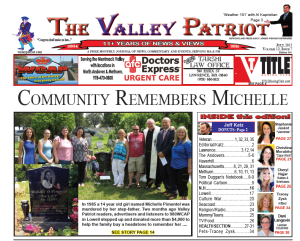 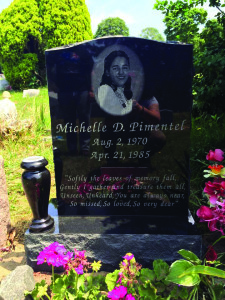 When Christy Rivera and her friend Lisa Henshall called into Valley Patriot publisher Tom Duggan’s radio show on 980WCAP a few weeks ago, they had no idea the outpouring of support they would get in their efforts to raise money for a headstone for Rivera’s sister, Michelle Pimentel.

Pimentel was murdered by her stepfather in 1985, but her family didn’t have any money to pay for her funeral. “We had to take up a collection and rely on donations to bury my sister,” Rivera said. “But, we never raised enough money for a headstone.”

Rivera said she was sickened over the years, every time she went to the cemetery where her sister was buried.

“It was like she never existed, and when I am gone, who will know where my sister is,” she asked on Valley Patriot publisher Tom Duggan’s radio program. “Who will know that the person in that unmarked grave was my sister Michelle?”

Valley Patriot readers, advertisers, and WCAP listeners immediately stepped up to the plate upon hearing the broadcast and collectively donated more than $4,000 in less than a week to buy a grave marker for Michelle. 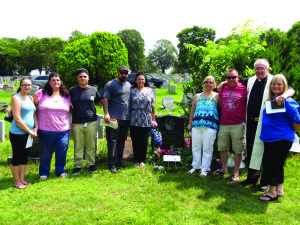 On Monday, July 6, 2015, Reverend Bob Gallagher of Salisbury presided over a short service for Pimentel at the Bellevue Cemetery in Lawrence, where the new gravestone was unveiled for family and friends for the first time.

“I just want to thank everyone,” Rivera said wiping tears from her face.

“Everyone from the Lawrence Schools who donated, Superintendent Jeff Riley who helped raise money, all the advertisers and readers of The Valley Patriot, Johnny Tarshi of the Tarshi Law Office, and especially Mike and Candy Collizi, of Colizzi memorials who did such an amazing job designing the stone. All of you have given Michelle the remembrance she deserves and my family will never forget that.”

Colizzi Memorials upgraded the stone quality that the Pimentel family had ordered once they received the donations. Colizzi also added a laser etching of a photo of Michelle at no extra cost.
Flanked by her son Zachary and her husband Ricky, Christy stood with family and friends remembering Michelle, as Reverend Gallagher lead them all in prayer.

After the service, Christy Rivera quietly lifted the cover of the gravestone and hugged her friend, Lisa Henshall. “I want to thank State Representative Diana DiZoglio for coming, and for helping,” she said. 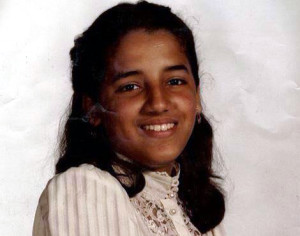 “Please, thank the students who collected change at school and all the people at the schools who helped make this day happen,” Christy said thanking him. “Now, I know that Michelle will never be forgotten, and nobody will ever walk by this grave again wondering who is buried here,” she said with a tear of joy and sadness rolling down her face. “It’s still hard,” she said. “But this is a good thing this really helped. I hope everyone knows how much we all appreciate this.”

Students, teachers and administrators of the Tarbox, Rollins, Henessey, South Lawrence East, and other schools donated to the memorial for Michelle Pimentel. One school sent The Valley Patriot a large, sealed envelope with more than $500 in quarters, nickels, and dimes, which they had collected from family and friends.

“It’s so special that the kids did that,” Lisa Henshall said afterwards. 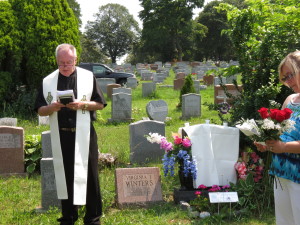 Michelle Pimentel was murdered in 1985 when she was in the 7th grade at the Kane School (now the South Lawrence East). Her stepfather had been abusing her and family members say he had fallen in love with her. Her friend, Lisa Henshall convinced Michelle to tell school officials what was happening and when she did, she was removed from the home. Her stepfather tracked her down shortly after that and stabbed her repeatedly until she was dead. He was caught by Lawrence Police, but committed suicide before he could go to trial.

Her fellow students at the Kane School lead a procession to the cemetery where she was laid to rest in an unmarked grave until this month. Christy Rivera asked that Kane School Alum be thanked for all those who reached out and helped after all these years.