By ValleyPatriot on December 8, 2004Comments Off on A Call To Serve 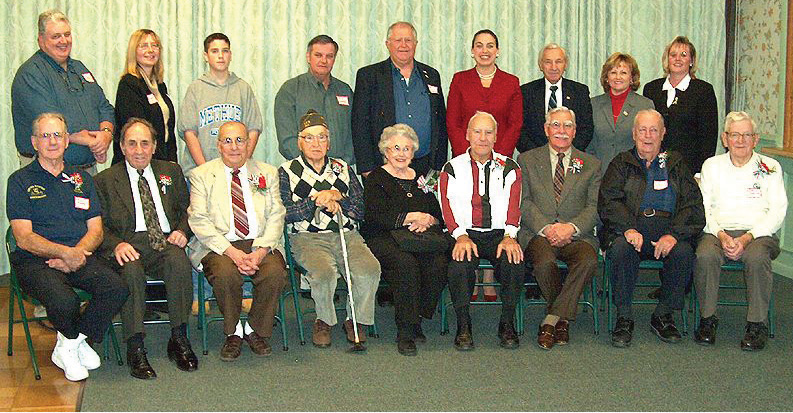 Who are those individuals who have answered the Call to Serve? Do we know our veterans? If you watch MCTV, Methuen Community Access Television, Channel 22 Call to Serve, a show dedicated to recording the oral histories of World War II veterans you would recognize some of them as your neighbors, your friends, your aunts, uncles, mothers, fathers, and grandparents. They are those who have ever stepped forward with the willingness to serve this great nation of ours.

Call to Serve is an ongoing effort by a group of military enthusiasts interested in recording oral histories of Methuen veterans. It is a cooperative effort by the Methuen Veterans’ Administrator Ed “Hoppy” Curran, himself a Vietnam veteran and the Council on Aging Executive Director, Corrine LaCharite. The all volunteer crew receives ongoing, free training at the MCTV studios by its Executive Director Karen Hayden and Bill Wallace. The crew represents a diverse group of individuals whose ages span eight decades and come from military and non-military backgrounds alike. Where could you see an eighty-plus year old World War II veteran, Michael Beshara, working along side a fourteen year old, high school football player named Joey Clover?

They work together as cameramen. Ed Curran mans the third camera on the show focusing only on the veterans themselves. The interviewees realize that behind the lens is someone they know, respect and appreciate. They know Curran as someone who has heard their stories a dozen times while he is securing their benefits in his office. They know him as a friend. Corrine LaCharite and Albert Grant co-produce the show and their quiet, calm is refreshing in the studio with their professionalism and grace. Grant, a twenty year Army veteran knows all too well about the Cold War era.

As director, Paul Clover has the humor and confidence to put all of us where he wants us. He is an eight year Navy veteran who is fortunate to share the wonderful experience of being part of Call to Serve with his son Joey. I guess you could call it a package deal and what a great deal it is. Others have worked on the show and have shown so much talent that they can be flexible enough to work in all aspects of the show’s production. They include Paul Perone, a Gulf War veteran and author of Toy Soldier, Jack Dorsey an incredible MCTV volunteer, Michelle Houle, and Lindsey Canfield an intern at MCTV.

Of course Karen Hayden and Bill Wallace are ready to jump in to make the quick fix which we have needed on occasion. Behind the scenes of this effort has been Susan Foster from the Methuen Senior Center. She has the uncanny ability to get things done. She provides all the logistics when we have a public showing of our work. I am blessed to have the privilege to be the host of Call to Serve. I do the interviews on the set and the research before we shoot. This is done with the cooperation of the guest and their families. This is the key to the show. Without their generosity and willingness to share their stories, Call to Serve would not be possible. They open their hearts, their heads and their homes to me. They make the show.

The shows are permanently archived in the Library of Congress, the Women in Military Service for America, Women at Work Museum (Attleboro), and the Nevins Library. The show placed third in the Alliance for Community Media Regional competition 2004.

I always joke around by saying we must live on some sort of “fault line” here in Methuen. We have interviewed twenty-two of the most amazing people I have ever had the privilege of meeting. We have Sara Payne Hayden, WASP; Luther McIlwain of the famed Tuskegee Airmen; two Distinguished Flying Cross recipients Joseph Lovoi and Joseph Messina; Arthur Wyman who was on the last ship to be hit by kamikazes and Thomas Petrillo who was on the first . The Burma Road is no stranger to Joseph Drelick. Two Marine Corps women, Winifred Medauer and Louise Shea Flynn, freed men to fight. Then there are two, Battle of the Budge veterans, Silvio Uliano and Mark D’Errico whom just happen to be neighbors! A Coast Guardsman, William Broderick invaded Iwo Jima. Herbert Hynes was an Armed Guard. Michael Beshara was part of a secret operation using Drones! Edmond Solomon served on an LST. Dominic Stella and Alfred Bruno were part of D-Day plus 6 and 2 respectively. Judy Schadlick was a WAC. Bill O’Connor couldn’t go in until his father came home! Fred Kuehn was with the Army Corps of Engineers. Andrew Bernard was a Navy Corpsman in Bougainville. Raymond Cormier was in the Navy. Jim Oliveri survived the collision of the USS Wasp and USS Hobson during the Korean War.

Silver Stars, Bronze Stars, Purple Hearts and Distinguished Flying Crosses. Sure we have them. We have them all. But what we really have are a bunch of kids who answered the Call to Serve. We honor them.