By Tom Duggan on August 25, 2013Comments Off on A Conversation with Lawrence Catholic Academy Principal, Jorge Hernandez, PART 1 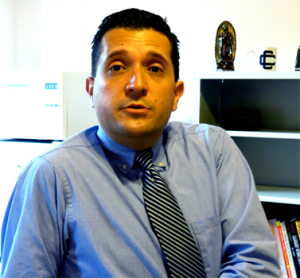 Lawrence Catholic Academy is located on Parker and Salem Streets in Lawrence and was once Saint Patrick’s Grammar School, run by Saint Patrick’s Church. Jorge Hernandez was hired earlier this year as the first lay person to be the principal of the School. Valley Patriot publisher, Tom Duggan, sat down with Mr. Hernandez to talk to him about the future of Lawrence Catholic Academy and his vision for the future of the school.

VP: You are the first lay person to be principal here. When did you start?

JH: Yes, I am the first lay principal for the school. I did just begin the 1st of July, and I’m excited to be here.

VP: Tell me about the evolution as to how they went from non-lay people to suddenly making a decision to do so.

JH: There wasn’t a specific decision to go with a non-lay person. The job was available. It was posted and I had the opportunity to apply. It just so happens that I was a person that was chosen. Sister Lucy, the former principal, decided to move on and pursue an opportunity. She was here previously as the principal of St. Patrick’s School, and she also then became the principal of Lawrence Catholic Academy (LCA) in its current form three years ago.

VP: How was the transition made from St. Pat’s?

JH: The school was actually formed back in 2010. It came from the merger of two Catholic schools and Saint Patrick’s, where we currently sit. The building of St. Pat’s is the one that’s used for Lawrence Catholic Academy, and Our Lady of Good Counsel. The students came in from both schools; there were some faculty members that came in from both schools. So, that’s how LCA was formed. It is not a parish school, so it doesn’t reside either with St. Patrick’s or with Our Lady of Good Counsel. It has its own Board of Trustees. So that’s the governance structure that exists.

VP: So when they posted the job, they just put it out to anybody? Most of the other people who applied, I’m sure, were nuns, priests, etc, right?

JH: A job description was formulated. It was posted on the Catholic schools’ office web sites. They ran advertisements in some publications, newspaper dailies, things like that.

VP: So why did you want to be principal here? You’re in Lawrence, the terrible reputation, the turmoil of all the different schools, St. Mary’s closing, and all the protesting. Why here? There are so many other places that are so much more tranquil?

JH: It’s not necessarily about always looking for something that is going to be an easy road to pursue and to walk down, but rather where you feel you are going to be able to be of most benefit.

For me, it’s a particular calling. For me, Tom, specifically, I view the opportunity that I’ve had in education really as a vocation. It’s a passion, and I don’t view it as just a job, but an opportunity to impact the lives of children in a positive manner, the way I know that I was positively impacted by the teachers and the people that were involved in my education as I was growing up.

The fact is that I was educated in a Catholic setting from kindergarten all the way through college. So, that neighborhood that I grew up in, in Englewood, California, shares some similarities with Lawrence. I’m a Lawrence resident. I’ve worked as a professional. I’ve worked as a high school teacher. I’ve worked as a college administrator at Merrimack College, and again, that’s where my path as an educator and a professional really began to focus on the Catholic component. After Merrimack, I worked with the Catholic Schools Office for the Archdiocese of Boston, and then the opportunity to look at and consider Lawrence Catholic Academy was afforded, so I applied. I was fortunate enough to be provided an opportunity to interview. And again, I was very fortunate to be offered the position. I was happy to accept, because I think there’s a lot of good that’s being done here. The school has 500 students, and they’re doing well.

With regards to enrollment, the students are coming out well-educated, well-prepared for the next steps that they’re going to take in terms of their high school careers, and the fact that they are able to do so, specifically within a values-based, and a faith-based setting, specifically around the Catholic faith, I think that’s something that continues to add to character development for our students that attend school here.

JH: High expectations for all students, and a path of continuous improvement. We are not looking to stay with the status quo. There are good results, good expectations, for our students that are occurring now. We want to make sure that that’s something we continue to push forward, so that no matter what it is that our students encounter in school, out of school; the expectations for everyone coming in is the same. And the results for achievement, high achievement, is going to be present for all of our students. We’re fortunate that we have a very dedicated faculty and staff here at the school.

VP: Talk about a couple of them. We’ll mention their names in the story.

JH: I know there are some faculty members that will go ahead, come in early, offer additional help for students that they know may need the help. They’ll stay late. There are teachers that are staying here until 5 or 6 o’clock to make sure that, not only are they staying for after school help, but they’re making sure that they’re well prepared for the things that are coming up in the weeks ahead. There’s an opportunity to continue to carry on conversations that happen in the classroom, outside of it, so that students are engaged in their learning. That’s what we want to see. We try to bring context to what it is our students are being taught, inside the classroom, so they can make their connection with their life, and thus, the students will be that much more willing to actually engage in the learning process. We then make sure that the students also understand that they have ownership of their learning, our teachers are here, serving as guides. It’s a learning process, and we’re looking to try to help them acquire a skill set that will allow them to be successful, not only as students, but as people, as professionals, as they move forward in whatever their future endeavors might take them.

VP: What kind of success rates do you have with kids graduating, going on to a decent high school and then a 4 year college? Do you know any of that, any of those numbers?

JH: With regards to the graduation rate, we have a high graduation rate. This past year, Tom, all the students in our eighth grade went ahead and went to a non-public school. There were a couple students that went to Greater Lawrence Vocational Technical School. All other students went either to a private school, or specifically, a Catholic school upon graduation. So, a very high success rate with regards to all of our students moving on to their next step in terms of their education.