By ValleyPatriot on November 3, 2021Comments Off on A Country Girl with a Strong Patriotic Message 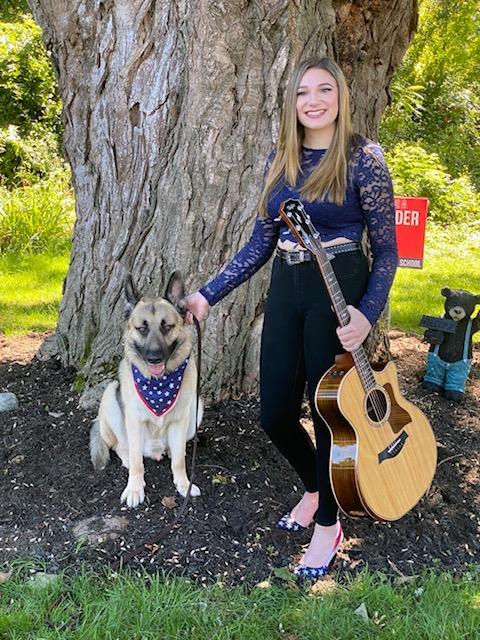 In case you were wondering who was the vocalist at the Vigil and funeral honoring Sgt. Johanny Rosario Pichardo, well that was country girl Bella Perrotta. Each song was sung from her soul with a deep love and respect for our fallen heroes. Kane wants you to meet the young woman behind this captivating voice.

Bella Perrotta is a gifted musician, and the best part is her willingness to share her talent with friends, family, and community. Although Bella is 17 years old, her poise and presentation is consistent with a mature performer well into their adult years. Kane thought in dog years he is only a smidge younger than Bella, but she seems so much more grown up then him.

In fact, Bella has performed in front of stadiums of people including the fans at the New England Revolution Soccer Game. Kane thought that would make him very nervous, but Bella feels honored to be able to respect her country and flag by singing the National Anthem, so she works through the jitters because the message of the Star-Spangled Banner is very important. Kane would agree, and he thinks Bella is very important. Imagine being her age and being willing to share important information with her peers and large groups of people.

Bella has often used her musical platform to show her respect and appreciation for our United States Military and Law Enforcement. In fact, Bella wrote and performed a song in 8th grade named “ I Salute You” to show appreciation for her school resource officers.

When Kane asked Bella about her passion for honoring law enforcement and military members she stated, “ my parents have brought me up to have great respect for police officers and the military.” Kane was curious if she felt this was common among her peers. Bella explained that by writing her song “ I salute you” she had the opportunity to bring the important work of law enforcement to light through her performance.

Kane first heard Bella perform at a Vigil in Lawrence, MA for Fallen Marine Sgt. Johanny Rosario Pichardo. Kane noticed Bella sings from her heart. She performed a flawless National Anthem, God Bless America, and Amazing Grace. She also sang patriotic country songs. When the announcer stated Bella was from Central Catholic, Kane wrongly assumed she was a faculty member, he was excited to learn she was a student.

For the first time Kane wished he had hands to clap, sometimes it is hard to be a dog. He wanted Bella to know he enjoyed her singing. Bella explained to Kane that singing at Johanny’s vigil and her funeral was truly an honor. This was her way of thanking the marines and soldiers for their sacrifice.

Since Kane was curious how Bella learned to be such a talented artist, he asked how she got started, Bella explained that her mom said she was singing since she could walk. Performances started as early as middle school variety shows.

Bella loved the way the crowd reacted and wanted to share her music with others. Besides her parents, Bella credits her voice coach Bernie Choiniere for her continued success. Bella stated “ Bernie shows me a lot of support and encourages me to step outside my comfort zone. He truly believes in me.” Bella currently performs in Concert Choir, and in an Acapella Group at school. Bella also performs country music professionally at gigs and local restaurants including Michael’s Flatbread in Salem, NH. Since Bella is so busy with school her family helps with marketing and other aspects of her business.

So, what is next for Bella? Kane is pleased to report off to college for a career in music! Bella is exploring different music tracks including music education, musical theater, and a Contract Music Artist track.

A local school Bella is applying to is The Berklee College of Music. Kane thinks they would be thrilled to have such a talented trail blazer like Bella attend their school. Kane feels lucky he was able to meet Bella; she is truly an inspiration. He also felt a little shy since he never met a country music star before.

Kane says in a world full of negativity be an inspiration like Bella. Check out her Facebook page Bella Perrotta – Country Girl.