By ValleyPatriot on February 22, 20133 Comments

In an effort to break through the white noise of news media bias, The Valley Patriot accepts first hand accounts of local events to give our readers a chance to see things through the eyes of the people who are there. 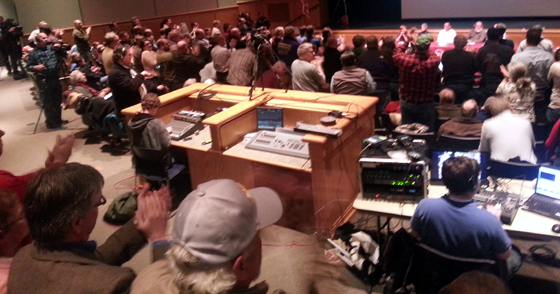 An Email from Massachusetts Firearm School announced that there was a Board of Selectmen meeting last Tuesday in Westford at the Stony Brook School Auditorium at 7:30pm. Being that it was last minute, my initial gut reaction was to ignore it, but why would MFS send out such an urgent email? Upon reading further, I figured that this was important enough that I needed to go. This is the part of the email that got my attention:

Westford Selectman, Bob Jeffries, has proposed a bylaw that will significantly affect the 2nd Amendment rights of the residents of Westford. If the bylaw passes it will do the following:

• Ban all firearms that accept a magazine.

• Owners would have 90 days to remove all banned firearms from town or surrender them to the police.

• Violators may be penalized by indictment or complaint in district court.

If this bylaw passes it will affect all Mass residents by setting a dangerous precedent other towns are sure to follow. 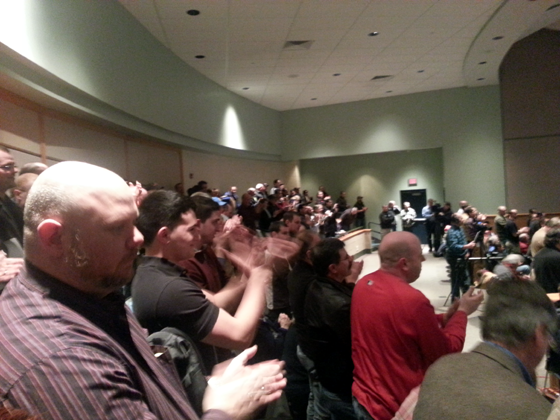 Pretty scary if you believe in the 2nd Amendment, at all. Heck for that matter, if you are a law abiding citizen who believes in personal liberty, the thought of the government coming to confiscate anything you rightfully own, is terrifying.

Now this is my first column for the Valley Patriot, so most people don’t know me other than maybe as “Farmer Paul” from Turtle Lane, Maple Farm in North Andover.

To be clear, I am not a Democrat or a Republican. But this doesn’t mean I have no opinion. Quite the contrary, I have an opinion on everything (just ask Farmer Kathy). But, my opinion has nothing to do with any political affiliation, but rather my perspective on each issue. I call myself a fiscal conservative and a social liberal. And to me, liberal is tied to liberty, as in personal liberty. I believe the government should keep its hands off our bodies, out of our bedrooms, and off our guns. As a side bar, I have always been mystified by people who can fight so hard for the liberties they want, but will also fight equally as hard to take away someone else’s liberties that they don’t want. Is hypocrisy learned or a human condition? But I digress…

As Kathy and I made our way down the back roads of Westford, we wondered if anyone would show up. That was only a fleeting thought as we turned down the long driveway to the middle school and encountered a long line of cars. As we drove by the school we passed four fire trucks, two TV trucks and countless police cars. We pulled into the first parking lot, no spots, but we did notice the license plates. As you would think, MA plates dominated. But there were also several plates from NH and even one from RI.

For a meeting we had only heard about 9 hours earlier, word must have spread far and fast. We drove through the second parking lot, no spots. Finally we found a spot in the back lot, but even that was filling up fast with those behind us.

The people walking in consisted of groups of guys, young couples, older couples, and individuals both men and women. Despite the controversial subject matter, most people seemed to be upbeat and pleasant. Citizens holding the doors while others exchanged thank-yous, strangers swapping hellos, while friends trade how have you beens. I highlight these observations only to say, there was no angry mob, and the “mouth breather” “knuckle dragger” comments can be shelved for this episode.

There was a line to get into the auditorium, the room was buzzing with over 500 people in my approximation. Kathy and I got the last two seats together, yet there were over 100 people behind us. Once the standing room was filled to capacity, the fire department encouraged people to attend via the overflow area in the gym.

We sat next to a gentleman from Littleton. He had struck up a conversation with the guys next to him from Holliston. Jokes were made but there was also serious conversation. Passion for the topic came through clear with anecdotes of sport shooting and hunting, success stories of protection rarely in today’s liberal media, and standard rhetorical arguments such as “why do we need cars that go faster than 65mph”. 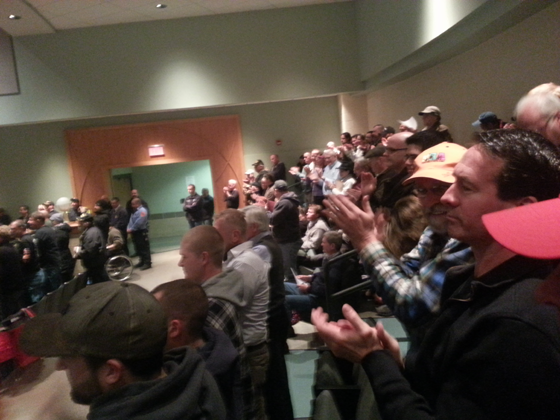 The Board of Selectmen meeting started at 7:34pm, and was called to order by the Chair of the Board, Kelly Ross. There was a brief, yet thorough, lecture on how the unusually large crowd should conduct ourselves at this meeting.

Apparently he felt this needed to be done, at what I believe he described as the largest meeting Westford had seen, and in which these special accommodations had to be made on short notice.

We then all stood for the Pledge of Allegiance, and everyone that I could see stood and put their hand on their heart. I have to say that this patriotic expression was recited with a gusto and heartfelt vigor that I have never witnessed before. There was no doubt this crowd loves their country.

The audience was poised for the first agenda item to start, when suddenly the Chair asked Selectman Robert Jefferies, (the selectman responsible for leading the Chapter 95 amendment), to speak.

Jefferies began by saying that this measure was meant to offer protection for this community from the same tragic events of Colorado and Connecticut. He stated that he wanted to “start a conversation” and this amendment was “meant to be a discussion within the town of Westford, a community discussion, that gotten way, way beyond that.” As if liberties should respect town lines and causes are jurisdictional.

And It was unclear whether his tone was one of disdain or one of defeat, but it was clear he was not happy. Then the preverbal bomb dropped, he stated that he was withdrawing the amendment. The room went from respectful silence to utter self restraint. Jefferies went on to say that this was probably not going to be the last of this issue, but that as of this moment this amendment clearly wasn’t going to get the support it needed. As a seeming plea for mercy, he stated that he had “gotten feedback” that covered all possible positions and he had heard enough.

From there, each of the selectman got a chance to speak, each identifying their vote to repeal the proposed amendment. But there were two moments that stood out.

The first was when Selectman Valerie Wormell stated “I would like to see this end here and now. This is an issue best left at the state and federal level” and the crowd erupted in a standing round of applause. After which, the Chair scolded us like school children (maybe I am dating myself, as I mean back with teachers scolded children) stating “you may be new to this” but this isn’t how things are done here “don’t do that again”.

The second memorable moment came from Selectman Andrea Paraner-Sweet when she made it clear this is not the last of this issue. Although she admitted that “she learned a lot” through this process, she said she felt that there was a place for this type of governance but it must be done in a way that ensures more success. Despite the night’s victory, speaking for myself, this lingering thought was quite unsettling.

A vote was taken by the board and immediately thereafter most of the crowd rose to leave. But, one got the sense that “business” wasn’t done. A few of us directed those standing to take a seat and hear what was next. The Chair then stated that at that moment the warrant was not closed, and because of that a citizen’s petition could be considered for adding to the warrant, and without coincidence there was a citizen’s petition that was identical to the amendment.

The room went silent, waiting for the other shoe to drop.

But relief quickly eased the audience as each of the selectman voted to keep the warrant closed, and to sign it in its current form. Within 10 minutes of the meeting being called to order, a jubilant crowd was exiting.

The warrant will be voted on in March, but there will be no reference to guns.