A New Year’s Resolution: Keep Fighting Back Against Cancer

By ValleyPatriot on January 6, 2011Comments Off on A New Year’s Resolution: Keep Fighting Back Against Cancer 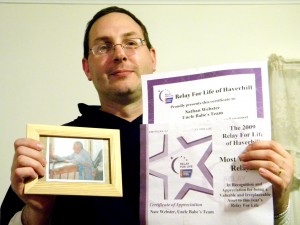 I remember the day I got the call that my dad was in the hospital with pneumonia. It was the day after my mom died from congestive heart failure. The day after Christmas 2008. I dreaded another hospital visit.

I thought it would be another routine visit to see him in the hospital, he had been there a few times because of his health problems from drinking and smoking.

When my sister called, she said that he was being transferred to a nursing home. That’s usually a good sign, that he was getting better and that maybe he just needed some extra care. 36 hours later he was rushed back to the hospital after the nurses had called a code blue to his room. He died, technically, and the EMT’s brought him back because there was no signed DNR (do not resuscitate) form, even though his wishes would have been for that.

During treatment for pneumonia, he was not able to eat or swallow and they did a biopsy of his throat – it was cancer. Squamous cell carcinoma – throat cancer, they told us – they gave us a grim prognosis of only 3 months to live.

The next call we got from my sister was the call that every family dreads – they told us that he was getting worse – 3 months had turned into just a few short hours. The family was called to say our last goodbyes. We had a priest come in and give him last rights, and

asked our dad to hold on till all the family members got there. My brother Jason came in a few minutes after my dad passed away.

The US Navy gave my dad a military burial with a nice service. The family gathered and the cousins shared stories about the uncle they called “babe”. I decided then that I was going to do something to honor my dad and his life.

Just a few short weeks later, I attended a Relay For Life team captain meeting for the first time. I wanted to share my story with others that have lost loved ones to this disease that does not sleep. Starting my own team was my way of giving back and fighting back. I wanted to do everything I could to find a cure. I was sad at the loss of my father, but I forged on and became team captain of “Uncle Babes” team in June of 2009.

It is now 2011, and on June 10th and 11th I will be walking the track at Northern Essex Community College in Haverhill with hundreds (and someday thousands) of other team captains, co-captains (my daughter Katie is my co-captain), families, friends, coworkers, businesses and organizations to do what we do best – raise money for The American Cancer Society’s Relay For Life of Haverhill.

For 24 hours, we will not sleep – because cancer never sleeps.

We will have fundraisers, light luminaries to honor those who are battling, and who have lost the battle, read poems and share stories, honor our survivors, and have a little fun with games, activities and music.

I will help fight back.

I will help find cures.

I will help people get well

And I will help people stay well.

We miss you dad.

For more information about the Relay For Life of Haverhill, or to donate to the general event, visit www.relayforlife.org/haverhillma,

To donate to or join Uncle Babes Team in the fight against cancer, visit http://tinyurl.com/ubtrelay or call 978-204-4692

Relay For Life Of Haverhill