By ValleyPatriot on September 2, 2010Comments Off on A “Thank You” to the ‘Friends of Erie’ 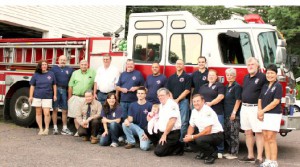 The truck is paid off!

Five simple words have never meant so much to so many of our Georgetown neighbors, and the members of Erie 4, the oldest privately owned fire company in the United States of America. Let me explain.

Beginning in 1854, Georgetown residents and neighbors from surrounding towns stepped forth to form a privately owned fire company, for the mutual protection of all in our community. Since that time, our friends and neighbors answering to the Erie 4 motto of “Warm Hearts, Willing Hands” have volunteered their time, sweat, and humble earnings to support Erie Fire Association No. 4, Inc.

With its fire station on North Street, Erie 4 serves the Town of Georgetown, MA as one of the Georgetown Fire Department’s two Fire Companies. “Although privately owned Fire Companies were common in the mid-eighteen hundreds, most of them have become owned by the Taxpayers. Through pride, stubbornness, and the support of many, Erie 4 has survived and matured into a fully modern, well trained Fire Company,” Erie relates on their website.

Stepping forward to 2010, with little fanfare, a few officers and members of Erie 4, gathered in front of ‘Engine 4’ at our regular monthly meeting to pose for a quick photograph to mark a milestone: the retirement of a six-figure FDA loan, (early mind you) that was secured in 2004 to purchase Engine 4.

While 2009 was challenging, and our nation and community continues to struggle in 2010, the ‘Friends of Erie” fundraising program has provided the funds necessary to fully retire the truck loan, early, and at a savings of hundreds of dollars in interest that would have been charged.

Every little bit helps, and the more than 1,016 different people who donated to the Friends of Erie deserve a great thank-you for their commitment and community spirit.

Established in 2001, the Friends of Erie program began the process to raise funds to bridge the financial gap needed to secure modern equipment for the firefighters and Town that Erie 4 supports.

Over the years, the ‘Friends of Erie’ has become the company’s largest yearly fundraiser. There are many who have contributed, and a lot of hard work over the years by many association members. I know if I mention one or two now, someone will be slighted, so let’s save that for another day.

I urge you to visit the Erie 4 website at www.ErieFour.org, and learn more about your community fire company, and the many neighbors who support our firefighters. Please attend a fundraising dinner this Fall, or check out Erie 4 at Georgetown Days on Sept. 25th-26th. Updates always at www.GeorgetownToday.com.