By Tom Duggan on November 26, 2017Comments Off on After Big Win, Mayor Rivera Has No Answers on Opioid Crisis – But He’ll Keep Doing More of It 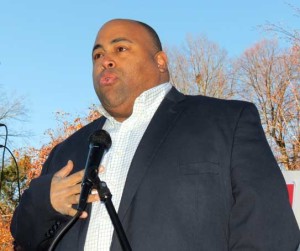 After his reelection win, Lawrence Mayor Dan Rivera addressed the opioid crisis admitting he didn’t have any answers, and saying it’s the responsibility of other government officials to solve the problem.

Here is what he said after being asked what he could do to solve the crime problem in Lawrence. “I don’t know what it is, but we’ll do more of it,” he said.

“The reality is, the wave of crime that we’re seeing is absolutely connected to the opioid crisis. So, if we’re not going to put more money into treatment, I’m talking mandatory six-month treatment, in a faraway place, not here in Lawrence where you can leave your treatment facility and find some drug – maybe Marion, Devens, or someplace else. We’ve got to, because if we don’t, we could arrest 40 people a day, it doesn’t matter. They are going to end up right back on the street doing the same drugs. So, we’ll continue to arrest people, trust me the men and women of the Lawrence police department have become very good about arresting people who sell drugs, you just need to read the paper about that. They have a hard job to do. So, I think at the end of the day there needs to be relief [from] someplace else and hopefully the state and federal level will do that.”

Asked how he would unify the city, Rivera said, “There are people that voted for me [who work on] different shop floors across the city and working in different factories who voted for Willie. They are going to go to work tomorrow and they don’t care. I’m their mayor, and I’ve got to go be responsible to them. So, when they call the city and we are supposed to do something we are going to get it done. And if we don’t, there will be hell to pay regardless of whether they voted for me or not. But, we are going to make sure we get it done.

Rivera was asked if the reported number of 96 people having died from violence or opioids was accurate. “I doubt it,” he replied. Asked if he knew how many people have died from opioid abuse in his four years as mayor, Rivera said he knew that there were 26 homicides, but did not know the number of people who died from overdoses. Asked if the city had compiled a list of how much it costs the taxpayers for police, fire, and ambulances to respond to the daily overdose and Narcan calls, Rivera said that he didn’t.

After Big Win, Mayor Rivera Has No Answers on Opioid Crisis – But He’ll Keep Doing More of It added by Tom Duggan on November 26, 2017
View all posts by Tom Duggan →