By ValleyPatriot on November 4, 2016Comments Off on Alone we can do so little, together we can do so much…..Helen Keller ~ ROBINS KITTY CORNER 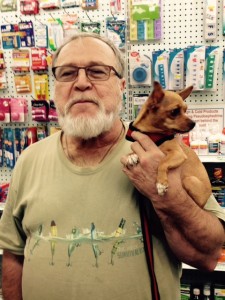 When you start rescuing cats in the neighborhood, the word gets out. Suddenly, people start bringing you cats. Before you know it, other animals start finding their way to your door.

I was working at the pharmacy and Jade, a young girl from the neighborhood, walked through the door with a Chihuahua in her arms. It was immediately apparent that this was not her pet. The dog had no collar and was extremely emaciated. Her nails had not been trimmed in quite a while and she clearly needed medical care. Jade had found the dog wandering the streets in Lawrence and wanted to help.

I asked Kelly if she would drive the dog to the MSPCA. She never made it to her car. She walked over to one of our neighbors who owns a couple of small dogs. Fortunately for that Chihuahua their hearts and home were big enough for one more animal. They instantly took her in and brought her to their veterinarian. After a required holding period to make sure the dog was not lost, the dog became theirs. It turned out the dog had no microchip, had not been spayed, and clearly had not eaten in a while. Since that day, Ginger has thrived in Ray and Paula’s care and still gets occasional visits from her friend Jade.

A few weeks later, Kelly mentioned to me that her neighbor had seen a guinea pig outside on her front lawn. I was instantly alarmed. Guinea pigs cannot survive outside and are no match for predators. Well, it just so happens that I had recently purchased my very own, easy to use, humane kitten trap. I must say, that trap didn’t know the difference between a guinea pig and a kitten, because the guinea pig was captured in less than an hour.

Nibbler is one lucky pig. He is completely spoiled and now lives happily with a small dog and four cats, and he has two humans for pets.

Next came the snapping turtle. It was one of those blistering hot summer days and I arrived home from work. The parking lot of my condo complex was deserted. Everyone was at the beach, except for me. I was standing in the hot sun looking down at the biggest turtle I had ever seen outside of an aquarium.

I’ll admit that my first thought was to just walk away, but I couldn’t do it. I started googling information about turtles. I questioned other volunteers at the MSPCA. Some advised me to pick it up by the back of the shell. Others advised me to use heavy gloves. Probably good advice, but I don’t put my hands in feral cat cages and I wasn’t putting my hands anywhere near that turtle. I decided to try to coax it into a cat trap so I could safely carry it back to the pond where it came from.

Lucky for me, one of my neighbors pulled up and saw me fumbling around in the parking lot. He remarked on what a large turtle it was and he went to his garage and promptly returned with a very large bucket. The next part happened fast, but I recall seeing lots of teeth and claws. I was quite relieved when that turtle entered the water and swam away. My advice: Don’t mess with turtles.

My other piece of advice? When someone shows up on your doorstep with a small cat carrier, do not assume that there is a cute little kitten inside; it might just be a squirrel. I think I’ll stick to rescuing cats.

Note: Lost dogs must first go through animal control before being brought to the MSPCA. Please E-mail me at: Robinjd@comcast.net if any questions.