By ValleyPatriot on March 1, 2017Comments Off on Amazon Scores Again with ‘Sneaky Pete’ ~ TV TALK with BILL CUSHING 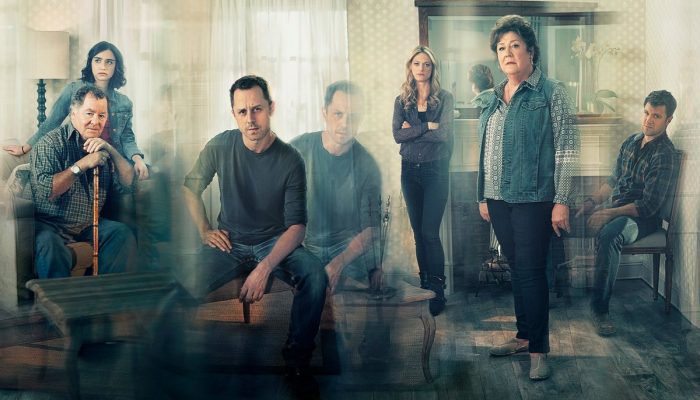 “The Truth Is Always Changing”. That’s the tag line for Amazon’s excellent new series ‘Sneaky Pete,’ and it couldn’t be more appropriate. In ‘Sneaky Pete’ we follow con-man Marius Josipovic (Giovanni Ribisi) who is released from prison with the knowledge that he is wanted by an ex-cop turned gangster named Vince (Bryan Cranston) who Marius scammed out of a fortune.

So, Marius takes his cellmate Pete Murphy’s identity and ends up working with Pete’s unsuspecting family and their bail bond business as a skip tracer with Pete’s cousin, Julia (Marin Ireland).
Pete’s family hasn’t seen him since he was a kid, over 20 years ago. So when Marius shows up knowing everything about them, it’s easy for them to buy that he’s Pete. Vince is holding Marius’ younger brother in the city, and Marius must find a way to pay back the money he owes him, all while conning Pete’s family.

The show begins with a fantastic pilot, and just gets better from there. The premise seems like it would have trouble holding up and that’s what makes it fun. Ribisi is excellent as Marius. He has always been a supporting player, but here he gets to be the lead, and he shines. Margo Martindale (The Americans) and Pete Gerety (The Wire) are great as Pete’s grandmother and grandfather. Libe Barer, plays Pete’s cousin Carly, who you always feel is onto Pete’s secret, but can never quite put the pieces together.

Where the show succeeds is in the way the story unfolds. Beginning with Marius about to get released from prison, and the show relays how he ended up there in a very creative way through flashbacks. But then knowing that his secret could unravel at any moment, and comes very close to doing so several times, is what keeps you riveted. Admittedly, it does require a bit of a leap of faith from the viewer to buy into the premise that Marius could con this family into believing he is Pete. It’s made a bit more believable from the fact that Marius does resemble Pete a bit, and by Pete’s grandmother Audrey and his cousin Carly becoming skeptical of who Pete really is as early as episode 2.

The show also sets up an interesting story for next season in the final scenes, and yes the show has been picked up for a second season.

Bryan Cranston co-created the show with David Shore (House) and his fellow executive producer is Graham Yost (Justified,The Americans). They are all also involved in the writing of the show. ‘Sneaky Pete’ originally was ordered by CBS in late 2014, but by the following spring, the network declined to pick up the series. Amazon won the bidding.

Amazon has become a big player in the TV market over the last few years with great series like ‘Transparent,’ ‘Bosch,’ ‘Red Oaks,’ and ‘Goliath.’ It looks like they have another winner with this one.

If you like good, well written and well acted drama series with some good suspense and humor mixed in, then check out ‘Sneaky Pete.’

‘Sneaky Pete’ is available to stream on Amazon Prime Video.

Do you have any questions about TV? Email me at BillsTVTalk@gmail.com. I will answer all of your questions and will feature some of the questions I receive in a future column. For daily TV news, follow Bill on Twitter @TVNewsandNotes and on Facebook at TVNewsandNotes
www.tvnewsandnotes.com