By ValleyPatriot on June 1, 2016Comments Off on Amazon’s ‘Bosch’ Delivers The Goods ~ TV TALK with BILL CUSHING 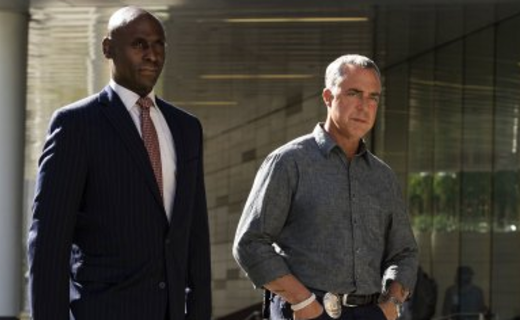 Bosch premiered in 2015 as one of Amazon’s new streaming series. While it had a very good first season that established characters and laid some good groundwork, season 2 of Bosch kicked it up a notch.

Season 2 starts with Harry back on the police force after a six-month leave due to an incident in season 1. He and partner Jerry Edgar (Jamie Hector) are investigating the mob-style killing of an adult film producer. But it’s not just the crime story that makes Bosch worth watching. There are other storylines that are interwoven throughout the season. One involves the complicated relationship between Bosch and his ex-wife Eleanor (Sarah Clarke), a former FBI profiler who now plays cards with Vegas high rollers. We also get to see more of Bosch’s daughter Maddie this season, as their relationship becomes more of a focal point of the story. Then there’s Deputy Commissioner Irving, played by the always-excellent Lance Reddick. He and Harry butted heads in season 1, but here Harry helps out Irving with a personal crisis.

In season one we got a little peek into Harry’s back-story too. His mother was a prostitute who was murdered when he was a kid, and the killer has never been determined. Harry spent much of his childhood in state care where he was abused. This is explored a little more in season 2.
While the show has many characters, ultimately the show is carried squarely on the shoulders of Titus Welliver. Welliver does a great job playing Bosch. You would think that this type of character has been done so many times that it would feel old and stale. The hard-boiled, jazz loving, veteran cop who occasionally gets to be the tough guy and kick some ass. But Welliver brings something new and fresh to the role. He breathes life into the grouchy and stubborn character of Harry Bosch that readers of the novels know and love. The show doesn’t always take place in the flashy LA that you see on other cop shows. It takes place around neighborhoods that you don’t always see on TV, delivering a level of realism and grittiness that we as viewers much appreciate. It makes the city of Los Angeles a major character on the show and really adds to the overall character of the series.

Put it all together and you have one of TV’s best cop shows. It improved upon its first season, delivering a thoroughly entertaining and highly binge-able season 2. Its shouldn’t really be a surprise that this series is so good since it was developed by producer-writer Eric Overmyer, who’s worked on two of the finest network and cable series ever, NBC’s Homicide: Life on the Street and HBO’s The Wire.

If you’re someone who likes a good solid detective novel that unfolds methodically then Bosch is the series for you. You’ll get hooked on this series very quickly and like me, you’ll be very much looking forward to season 3.

Bosch is available to stream in its entirety on Amazon Prime.