By Christine Morabito on January 11, 2013Comments Off on America Has Never Needed the Tea Party More 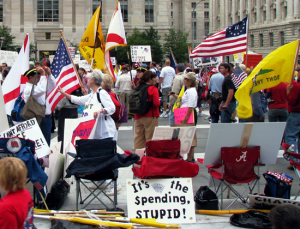 Either Congress is in denial about their historically low approval rating of 18 percent, or they have pathologically high self-esteem. Actually, both things may be true.

While taxpayers are bracing themselves for higher tax rates, looming inflation and pending known and unknown Obamacare costs, it is business as usual in Washington. Monkey business, that is.

Exhibit A: The Hurricane Sandy emergency funding bill passed the Senate. A good thing, you say? Maybe not. Politicians considered this bill such an emergency that only a small fraction of it would be spent in the next nine months. It also includes $150 million for salmon fisheries in both Alaska and the Gulf of Mexico, clearly nowhere near the affected areas. These pork-infused stocking stuffers – and these are just the ones that made the cut – were included in order to buy the 60 votes needed for the bill to pass the Senate. Luckily, the House was too busy with the “fiscal cliff” showdown to vote on this “Sandy scam” when it came before them. Now the bill will have to wait for the new Congress to take it up, and hopefully modify it. The bill will pass – and should – so storm victims can get the help they need. But, can we have it without the pork, please?

To make things even worse, while our livelihoods were being held hostage over the insufferable fiscal cliff negotiations (HR8), the president ordered the lifting of a salary freeze, giving Congress and other federal officials a raise – perhaps an incentive to vote for the 157-page HR8? Only in American would the Senate be rewarded with a raise when it has not produced a budget in 3 years. Obama’s latest executive order (‘cause that’s how he rolls) was a shock even to the intended recipients. Members of Congress, stunned by the move, felt it unseemly to accept a raise under the circumstances and declined the increase which would have cost taxpayers about $11 billion.

Speaking of the fiscal cliff negotiations, where are the spending cuts? No seriously. We are buried in debt to the tune of $16 trillion and counting. Where in Sam Hell are the spending cuts? HR8 requires only $1 in cuts for every $41 in tax increases. How absurd. They cannot possibly be naïve enough to believe the promise of “future” spending cuts. History tells us otherwise. Remember the $3 in cuts promised to Ronald Reagan for every $1 in tax increases? It never happened. Then in 1990, George H.W. Bush fell for the 2-for-1 cuts that never came. As Matt Kibbe, President and CEO of FreedomWorks, likes to say, “Washington has an over-spending problem, not an under-taxing problem.”

I was shocked by the shortsightedness of our lawmakers, who passed this bill, a bill they could not have possibly read, before the Congressional Budget Office even had a chance to score it. We now find out it increases spending by $4 trillion over ten years. Anyone who believes we have not already gone over the fiscal cliff is delusional. If we do not seriously cut expenditures and enact real entitlement reform – forget falling off the cliff – we are about to splatter on the ground below.

As we begin 2013 with the 113th Congress, no doubt our elected officials are nostalgic for the days when their antics went unnoticed. The citizen uprising that became the Tea Party has forever changed that. Before the Tea Party, who, except for a few conservatives, was talking about the deficit and out-of-control spending? You cannot have an accountable government without the Tea Party any more than you can trust a fox to guard the hen house.

The 2012 election was a devastating defeat for conservatives. As we tend our wounds, I hear many people ask “What does it matter?” As frustrating as it is, what we do matters a great deal. We will live to fight another day. Why? Maybe it is because we care too much.

We also know too much. We know how things work in Washington. We know about the backroom deals, the bills padded with pork, the profiteering and corruption. As tempting as it is to ignore politics, like so many uninformed Americans, we cannot put the genie back in the bottle. We know all too well what happens when we’re not watching.

Morning Bell: 10 Facts on the Fiscal Cliff, Debt, and Spending