By Christine Morabito on December 3, 2011Comments Off on American Capitalism: Why the Hate? 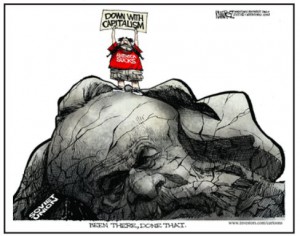 What a sad day in this country when our capitalist system is equated with evil. With the emergence of the Occupy Wall Street movement, and the Obama administration urging them on, class warfare has pulled up an unwelcomed chair. Surely I am not the only one deeply disturbed by anarchists chanting “eat the rich.” When asked to comment on the protest, the criminally unfunny Roseanne Barr joked (at least I thought it was a joke) about bringing back the guillotine. In her nostalgia for the French Revolution’s Reign of Terror, she generously offered to reserve beheadings for “the worst of the worst” capitalists.

Whether it stems from ignorance or gross misinformation, a large percentage of these occupiers truly believe that communism and socialism are superior to our system of free market capitalism. I know public education is one hot mess, but what kind of malarkey are we teaching these kids? Are they not taught about the forced labor, starvation, oppression and brutality under Stalin’s Russia, Hitler’s Germany, Communist China or North Korea?

You can hardly blame them. We have ruined the occupy generation with decades of revisionist history, moral relativism, no-fault divorces and a society where everybody wins and anything goes. You have to feel sorry for a culture that believes Che Guevara, the sadistic, mass murdering, narcissistic hit-man for Fidel Castro, is a cult hero worthy of a clothing line.

In startling contrast, I offer you the miracle of capitalism as expressed in the book “The 5,000 Year Leap”: In America’s infancy, settlers used the same primitive tools and farming methods which had been around for 5,000 years. Yet, because of the unique freedoms they came to enjoy – especially property rights and the ability to trade freely with one another – in just a few hundred years Americans were providing food for the world and landing on the moon.

Free market capitalism was not the colonist’s first choice, but an experiment tried after collectivism failed miserably — for the same reason it always fails – because some people would rather sit around and let others do the work. Our system has a mechanism for dealing with the lazy – others prosper while the lazy do not. In this country, industrious people who wish to succeed will do so, if given freedom and incentive (or as the Left calls it, greed). In communist and socialist countries without personal freedoms people only do what they must in order to avoid being punished by governments that force people to work.

The invention of electricity, automobiles, air travel, vaccines, air conditioning, refrigeration and computers did not happen by accident. They were created by people motivated to improve the quality of life for themselves and their families. Besides making a profit, they just so happened to vastly improve millions of lives along the way. In our capitalist system we all get richer and our lives get easier when entrepreneurs prosper.

Compared with the rest of the world, Americans have few obstacles to succeeding, with countless examples and stories of rags to riches. Socialists and others on the left insist that a multitude of groups are under-privileged and oppressed. While granting these people victim status, they eliminate their drive to succeed, creating dependency and doing them a grave injustice. Remember, big government types have a vested interest in people remaining dependent on the big government programs they create.

Capitalists, on the other hand, want everyone to succeed. Just because I get wealthy does not mean that you cannot. Leftists will tell you that corporations only get rich by exploiting workers. Last time I checked there were no forced labor camps in this country. If you are unhappy with your salary, you are free to negotiate with your employer for whatever amount you believe your skills are worth. To increase your earning potential it is your responsibility to obtain the necessary skills. A grocery bagger at Market Basket may believe his skills are worth $20 an hour. While he may be a superb bagger, in an hour he does not do $20 worth of work.

Occupy protestors blame capitalism for all the ills of mankind. They say the system is corrupt and should be destroyed. The cause of most corruption is government’s interference, not the lack of it. Capitalism in its purest form is inherently free of government involvement. In a true free market, individuals trade with each other to their mutual benefit. When a company is unethical or negligent and people find out (they always do) the business suffers and eventually goes bankrupt. When government interferes and deems company A “too big to fail” or exempts company B from taxes in reward for campaign contributions, then we have a big problem.

Capitalism is also blamed for “child labor” and “sweatshops” in underdeveloped countries. While salaries in places like Bangladesh or Indonesia seem meager to us, lives are dramatically improved simply by providing employment in the first place, not to mention allowing them to earn an above average standard of living. To say these people are poor is a gross understatement – Third World poor should not be confused with American poor, who have air conditioning, televisions and access to healthcare. These are countries where the alternative to working in so called sweatshops may be starvation, child prostitution and disease.

As a conservative, I am often accused of supporting “the rich.” If that describes inventors, business owners, scientists, job creators, innovators and entrepreneurs, then color me guilty. If, along the way I encounter a poor person who creates jobs and radically improves the lives of his fellow man, I’ll gladly support him too.