By Tom Duggan on November 19, 2013Comments Off on An Interview with Former UN Ambassador John Bolton 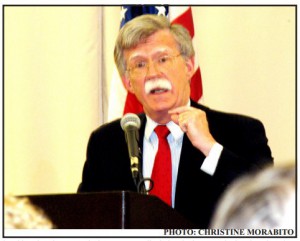 CM: Do you believe national security will play a big part in the 2016 Presidential election? If Hillary Clinton runs, how do you think her record on foreign policy will likely be viewed?

JB: I think national security should play a major role in the 2016 election and indeed all of our elections. It is an issue that has a profound impact on our way of life in America. Stability and peace in the world are pretty fragile as it is. If the United States has a less active role, the potential growth for anarchy in the world increases, then that will have direct impact on us. People fill their gas tanks and cars regularly. That is the paradigm example of the intersection of national security policy and domestic economic policy. And I think if Hillary Clinton is the Democratic nominee, you couldn’t get a better example. Her principal qualification for the Presidency is her four years as Secretary of State. I think that means that’s going to be open to considerable scrutiny, beginning with the debacle at Benghazi on September 11, 2012, when our ambassador and three other Americans were killed, and the subsequent year, when nothing was done either to avenge their death, to retaliate for the murders, or to do anything to capture the people who committed the atrocity.

CM: Speaking of the 2016 Presidential election, what would you look for in the next candidate for President of the United States?

JB: I think, whether the nominee is the Republican or the Democrat, obviously I’m going to support the Republican, but you need somebody who knows how to run the Executive Branch of the government. Now that may seem like a small point, but unfortunately, over the past 4 1/2 years, we’ve had a President, agree or disagree with him on the policy decisions he’s had to make, he barely knows where his government is. We haven’t had a President this ineffective since sometime in the 19th century. He’s ineffective politically. He can’t run his own government. He acts like it’s independent of him, that the only thing he controls is the White House staff, and the result, it’s certainly true in foreign defense policy, but I think it’s true in domestic policy as well, is you have a government that just roams around on its own. I think that’s one of the reasons people are concerned with the uncontrolled growth of federal spending, federal regulatory authority domestically. The President is the Chief Executive Officer of the Government of the United States, and if he’s not on top of his job, things are going to happen that can only be detrimental to the rest of society.

TD: Mr. Ambassador, how frustrating is it, knowing what you know about the UN and knowing what you know about world affairs, being in this country and listening to, I guess what Colonel Allen West would call the woosification of America, where everyone just wants to love the Muslims and think that they love their children too, and there’s really no difference between anybody.

JB: Well, it’s frustrating, but more significantly, I think the failure to pay attention to threats to the United States and its friends and allies, doesn’t mean that those threats don’t exist, and won’t get more serious. The President never talks about national security policy unless he absolutely has to, when something is forced on to him, as with Syria’s use of chemical weapons back in August, or where the President can claim credit for something that he had very little to do with, like the killing of Osama Bin Laden, which was an operation 10 years in the making. I am also disturbed, I have to say, that the Republicans over the last 4 1/2 years have not taken the President on, on the subject of national security, whether they’re uncomfortable with it themselves, or they’re afraid to state their positions.

The net effect is you don’t have the President talking about these threats; you don’t have the Republicans talking about these threats, and yet, they continue to grow and pose risks for the country down the road. Our adversaries are not gracious enough to wait for us to get our economic house in order here at home. They calibrate they’ve got a weak, inattentive President in the White House, so for the next three years, I’m really worried that the pace and the scope of the challenges we’re going to face internationally is going to grow, as our adversaries try to take advantage of what they see as a window of vulnerability.

TD: Why is it that you think Americans are so naïve that they think all these Muslims just love their children too, and we’re all the same, and if we just could understand life from their perspective, everything would be ok.

JB: I think the vast bulk of the American population is much more aware, much more pragmatic than their political leaders or political operatives give them credit for. I think the people understand other countries have adverse interest to the United States, and they expect the President to defend the United States against these foreign threats. I really think this is a disease of a segment of the intellectual elite in America, and the Left Wing of the Democratic Party, both of which are exemplified by Barack Obama. You can love your children and want a better life for them, and still believe that the Western Civilization that we live in is fundamentally corrupt and immoral, and that is a threat to the type of theocracy that many terrorists and Islamic Radicalists want to create, not just for their own lands, but for others as well. The fact is it is not always just a failure to communicate that causes problems internationally. It’s a clash of interests and ideologies. We saw that in two World Wars in the 20th century; we saw it in the Cold War; I think we see it again from the threat of radical Islamists’ terrorism.

We can either deal with it as what it is, which is a Global War which is being waged against us and our friends and allies like Israel, or we can treat it like President Obama does, like a form of law enforcement problem, sort of like a robbery of the local Starbucks, maybe a little bit more serious. I think that law enforcement approach is what we followed in the 1980’s and the 1990’s, and it brought us the first September 11th. We understood at that point, I think, we were in a Global War on terrorism. We now, large parts of the ruling class have forgotten that. I hope it doesn’t come back to us with another terrorist attack this time using weapons of mass destruction, nuclear, chemical, or biological. And that’s why I think it’s so important that all of us, as citizens, understand why national security has to be at the top of the list of priorities in the national debate. Those issues, those threats, do not go away just while we talk about the government shutdown, or the debt ceiling, or anything else. These are important issues; I don’t denigrate them in the slightest. What bothers me is the absence of debate on foreign and defense policy.

CM: It appears as if the Obama Administration, either knowingly or unknowingly, is supporting the overthrow of one secular government after another secular government, and he seems to be supporting regimes that are allowing for Christians to be slaughtered. Is this just a coincidence or do you think there’s something else going on here?

JB: Well, I think part of it is sheer incompetence. There’s a saying that a federal judge once gave to me, that in the federal government, 99% of all conspiracies turn out to be simple mess ups, and I think there is a lot in that, but I think the administration has a view that’s very comfortable with the decline of western power and American power in particular. They don’t see anybody as being particularly advantaged over anybody else, and I don’t think they’re especially concerned with issues of religious freedom. I don’t think they understand that democracy is more than just holding an election and counting votes; it’s a culture; it’s a way of life. We’re still perfecting it in this country, and the view that they have taken, for example, the Muslim Brotherhood Government of Mohamed Morsi in Egypt, is divorced from reality. That’s why the people of Egypt went into the streets to get rid of the government, because they saw it would impose strict Sharia law; it would not return to true democracy, and they weren’t about to have that. So, it’s very troubling, I think, this misguided view this administration has, and it’s even more troubling we’ve got three years to go.

TD: Where can the average American go to find out what’s really going on with the Muslim threat around the world that cuts through the white noise of cable news media, which doesn’t really seem to get it.

JB: There’s the American Institute web site. There’s the Gatestone Institute. There’s Frank Gaffney. There are a range of Secure America [Now], securefreedom.com, and many others. I think it’s important that the public take time to educate itself. You know, nobody’s going to defend us if we don’t defend ourselves first, and if we don’t focus on these issues, we’re going to be at risk. I think a lot of it rests on the American people, and I think when the issue is brought to their attention, they will respond. This goes back to the point that I’ve made, that it’s the fault of our political leaders for not presenting these issues to the people and letting them make a choice. If they’re not made aware of the threats, how are they ever going to be in a position to respond?

TD: Thank you very much for your time, Ambassador.