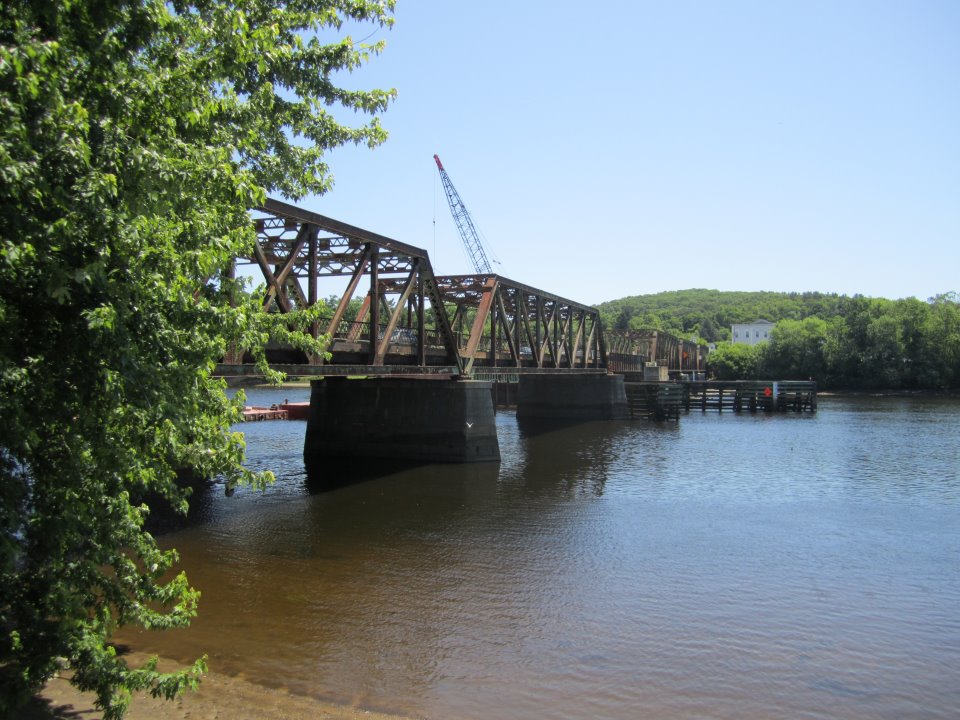 As part of a new public access TV program called Groveland Chronicles I devoted a portion of the first episode to the building of the new bridge. I had the opportunity to interview Vince DeAngelo the Resident Engineer of the project and his supervisor David Conroy of the Mass. Department of Transportation. The Mass Dept of Transportation provides all the necessary supervision, compliance, inspection and payment services for the project. Here are excerpts from the interviews:

Q. When was the project initiated and when is it expected to be completed? Who was the contract awarded to and at what cost?

Q Is it true that the project is slightly ahead of schedule because of a mild winter?

A. (V. DeAngelo) No, we wouldn’t consider the project ahead of schedule although we did have a mild winter. In fact, we were probably a little behind schedule due to last year’s very harsh winter. Cianbro, the General Contractor for this project, has accelerated their work operations and has worked substantial extra hours through this past winter to get the project back on track (on schedule) .

Q It was very exciting to see some very large beams from Pennsylvania arrive at the site and be installed from the Haverhill side just a few weeks ago. What can we expect for activities for this summer?

A. (V. DeAngelo) The remaining girders will be delivered and installed, deck construction will begin, mechanical and electrical assembly will occur for the movable span and some approach work will be done on both ends of the new bridge.

Q. When the bridge is completed the old one will be dismantled. Will you and DOT still be involved in supervising that phase of the project?

A (V. DeAngelo) Yes, the contract for this project includes the construction of the new bridge as well as the demolition and removal of the old one.

Q. What has been some of the unique challenges and conditions for this project?

A. (D. Conroy) Due to the spawning and migration of various species of endangered fish, which occurs in this area, the contractor was not allowed to perform any work within the water during specified times of the year. Because of this restriction, cofferdams were constructed to enclose areas around the piers (structures that hold up the deck and road). This allowed work to continue without disruption to the ecosystem and the spawning fish.

Q. What is the most interesting elements of this project for you as an engineer?

A. (D. Conroy) The construction of a single leaf bascule bridge (movable/ draw bridge) and all its complex, associated mechanical and electrical components are the most unique aspects of this project. Movable bridge projects are not as common anymore. Additionally, the project continues at a site which runs directly parallel to the main route without the closing of that route (Routes 97/113) This is a major advantage for the motoring public whereas most other projects the roads are closed for an extended period of time while one bridge is dismantled and another one is built.

6 Responses to "An Update on the Groveland Bridge"