By Tom Duggan on May 24, 2015Comments Off on Andover Teen’s Eagle Scout Project Benefits Boys & Girls Club of Lawrence 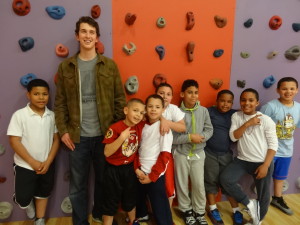 For his Eagle Scout project, 16-year-old Henry Duerr of Andover wanted to work on a project that was personally meaningful to him and beneficial to local kids. The result: a new traverse rock-climbing wall at the Boys & Girls Club of Lawrence (BGCL).

“My little brother donated a bunch of basketballs to the club for his bar mitzvah project a year ago. I had to one-up him,” joked Duerr, a junior at Andover High School and member of Venturing Crew 7 of Chelmsford, a co-ed program for scouts ages 14 to 20.

After receiving approval in December, Duerr planned the scope of the project, solicited donated materials, fundraised $600, and oversaw his fellow scouts and other volunteers during four workdays. The 16-foot-long by 8-foot-high wall was completed with rock climbing holds donated by Boston Rock Gym.

“When we were putting up the wall, a lot of kids were asking if they could try it,” he said. “The fact they immediately took to it and thought it looks fun made me feel good.”

Duerr said he has become passionate about rock climbing since learning the sport three years ago. He got the idea for his Eagle Scout project last summer at Camp Aleksey in Plymouth, N.H., where his coach built a climbing wall for the campers’ use when they couldn’t make it to the crag. Constructing a similar wall at BGCL appealed to him because of the members’ range of ages from 7 to 18, the club’s emphasis on healthy living, and the life skills from which the kids can benefit: patience, discipline, and creative problem solving.

Duerr reasons that perhaps there are youth members like him, who prefer a challenging yet supportive activity as opposed to the competitive nature of other team sports. In fact, he notes there are no limits to the boundaries that can be pushed through climbing.

“The Boys & Girls Club of Lawrence does good work, and this is something different for the kids to do with a little flavor of Henry,” Duerr said. “My goal is to have an impact on the sport of climbing, whether it’s discovering a new route or new crag, or spawning a whole generation of little climbers. If I hear a famous climber interviewed someday who says they started climbing at BGCL, that would make me happier than anything.”

About the Boys & Girls Club of Lawrence