By Dr. Charles Ormsby on April 8, 2008Comments Off on Are you a conservative?

Can you pass the conservative litmus test?

* A dedication to individual liberty and the primacy of the individual,

* A government dedicated to the rule of law (starting but not ending with strict interpretation of our Constitution based on the original intent of the Founders),

* A no-compromise stance in defense of our most fundamental rights with particular focus on our First and Second Amendment rights, and

* An insistence that government violations of our property rights be substantially reduced through a radical reform of our tax laws.

Any significant deviation from these principles by a candidate for public office seeking the support of Conservatives should be considered disqualifying.

But what about the myriad of day-to-day issues such as Social Security, health care, welfare, education, abortion, labor laws, and energy policy… right down to more mundane issues such as smoking and helmet laws?

Each of these issues represents a problem that must be addressed and each has its own complicating factors. In some cases the dominant factor is technology, in others it is cost, and in still others it is a question of organization, meaning, how should human and other capital assets be deployed to provide an appropriate solution? Of course, for the two lesser issues listed it is none of these; it is merely that some people just do not like being told what to do! Which leads to a critical question: Who should decide; the government or the individual?

Before government social engineers start concocting solutions to these “societal problems,” maybe we should take a deep breath and think about the core principles and how they should guide Conservatives as we consider policy options.

Our core principles demand that the policies Conservatives champion must maximize individual liberty so that we, as individuals or with the mutual cooperation of others, can produce the necessities of life and, with hard work, accumulate assets that will make life as comfortable and enjoyable as possible.

It is not government’s function to produce or provide those necessities; nor is it to guarantee any particular standard of living or protect us from our own ignorance or stupidity. If it were, it would logically follow that government must have the power to abrogate our rights. Otherwise, how could it fulfill its responsibilities? Government would need to have the power to command individuals to produce and then confiscate the products of those efforts. Individual rights are meaningless in this context.

Liberty demands that government’s role be limited to protecting us from others (foreign and domestic) who would initiate force or fraud against us and threaten our lives or property.

Regular readers of this column are probably prepared for an argument in favor of a return to the libertarian ideal; one that was most closely approximated during Jefferson’s tenure as president 200 years ago. While that is tempting and represents a prescription I would endorse, the political state of affairs that existed during Jefferson’s time has receded so far in our rearview mirror that it might take generations to recapture.

Unfortunately, we now have a population that has lost its appreciation for the gift of liberty and we are saddled with a legal and regulatory infrastructure that is choking the life out of society. The most valuable contribution Conservatives can make is to chart a course on every issue that will move us in the direction of greater individual liberty and personal responsibility. What are the characteristics that Conservative policies should exhibit?

If our policies are to be consistent with our core principles, they must emphasize persuasion, not force. Our laws must allow individuals to interact with each other based on voluntary and mutual consent to the maximum extent possible and not force us to participate through compulsion. In the economic sphere, this means free market solutions should be emphasized whenever possible.

This is the polar opposite of modern Liberal dogma that emphasizes a collective determination of what is best for everyone (as determined by the anointed Liberal elite) and then enacting laws to impose that solution by force. For Liberals, liberty is an after-thought or, more likely, a major impediment to their agenda.

Different Conservatives, addressing these issues and sincerely trying to follow the principles suggested here, may come up with different proposed solutions. This is merely a sign that the problems are challenging, not that there is necessarily any ill-intent. Analysis and debate should follow and, hopefully, one or several specific solutions will emerge that are worthy of widespread Conservative support. 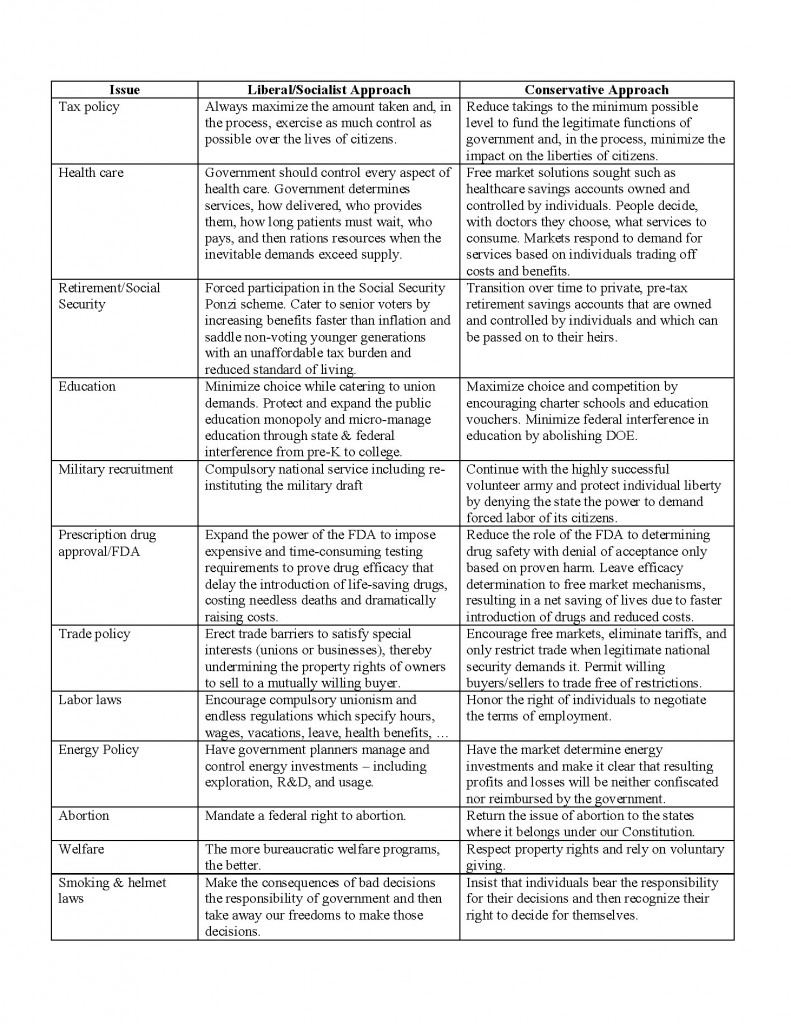 The above table provides a comparison, at a very general level, of the differences in approach to major policy issues. The Conservative positions outlined are not meant to be ideologically pure, but they will set us on a course that increases individual freedom. On a purely practical level, they will also ensure a rapidly improving standard of living that is in stark contrast to the economic failure that our Liberal/Socialist course has in store for us.

The comparison couldn’t be starker. The ideological battle for the last 225 years – maybe 10,000 years – has been between individual liberty and government coercion. Once coercion gains its final grip, it will take centuries to be loosened. We have become accustomed to a significant degree of personal liberty and we treat it as a cheap birthright. But infringements of that liberty are now commonplace and most of us take it as a legitimate role of government to impose those infringements for the “common good.”

We are near a tipping point. Our society is on the verge of falling over an abyss. The fall will be difficult to survive and the abyss nearly impossible to climb out of.

Most of the rest of the world is wandering about at the bottom of this abyss and looking up – clueless as to how we reached the top and hating us for our good fortune. Many in the U.S. are equally clueless of how we got to the top. One thing is certain: it wasn’t merely good fortune that got us here. Our forefathers treasured individual liberty and understood how important the concepts of liberty, free markets and limited government were.

We are about to squander these gifts due to ignorance and neglect. This would be the most sinful act in history. Only if Conservatives grasp these core principles and band together to defeat the champions of collectivism will our free society survive.