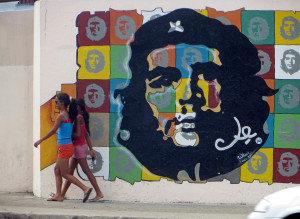 I’ll try not to judge. I’m sure you would never knowingly celebrate a violent, bloodthirsty hit-man for Fidel Castro, the brutal communist dictator.

If we learned anything from Hitler, Stalin, Pol Pot and Mao, it’s that tyrants are good at marketing. The trick to selling their snake oil is in the packaging. They control the media, and hence the message. While most of us are skeptical consumers when it comes to our despots, there are gullible windbags like Michael Moore peddling the lie that Cuba has better health care than America, because – get this –he went there and the Cuban government showed him (wink, wink).

”When a lie is repeated often enough, people start to believe it. Maybe that is why Ernesto “Che” Guevara has enjoyed such a cult following around the world. Somewhere between the rhetoric of American apologists and the failure of our public schools to teach actual history, you probably never learned the following about your beloved, El Che:

Cuban-American Vietnam veteran and Former CIA operative, Felix Rodriguez, who ultimately helped capture Guevara, told Newsmax: “I believe that eventually people will see what he really was. He was an assassin.” Rodriguez continued, “He was an individual with very little regard for life. He enjoyed killing people.”

In Che’s words: A revolutionary must become a cold killing machine motivated by pure hate.” Another fan favorite: “Crazy with fury I will stain my rifle red while slaughtering any enemy that falls in my hands! My nostrils dilate while savoring the acrid odor of gunpowder and blood. With the deaths of my enemies I prepare my being for the sacred fight and join the triumphant proletariat with a bestial howl!”

There are accounts of Che shooting pregnant women in the stomach, simply because their families opposed him. Other than that, I’m sure he was a nice guy.

He was fascinated by violence. Castro’s hatchet-man ordered thousands of executions, earning him the nickname “Butcher of La Cabaña.” In Che’s own words, “To send men to the firing squad, judicial proof is unnecessary … These procedures are an archaic bourgeois detail. This is a revolution!”

Yet, actor Johnny Depp wears a pendant of the sociopath around his neck.

This hygienically challenged “freedom fighter” despised free speech, freedom of the press and religion. He ordered books burned and signed death warrants for authors who dared to oppose him. According to Cuban jazz legend, Paquito D’Rivera, “Che hated artists, so how is it possible that artists still today support the image of Che Guevara?” Cuban songwriter Silvio Rodriguez, remembers, “We had to follow orders apparently given by a commission of the Central Committee of the Party whose job it was to approve songs, poems, and anything that had to do with Che Guevara.”

Che opined: “The black is indolent and a dreamer; spending his meager wage on frivolity or drink.” Also from his diary: “The blacks, those magnificent examples of the African race who have maintained their racial purity thanks to their lack of an affinity with bathing, have seen their territory invaded by a new kind of slave: the Portuguese.”

Doesn’t Jay Z prance around in a Guevara tee? Jessie Jackson called Che, “the most honest, courageous politician I have ever met.” Even Mike Tyson sports a tattoo of his champion Che.

El Che had a deep-seated hatred for the free people of the United States and their allies. In his words: “If the nuclear missiles had remained (in Cuba) we would have fired them against the heart of the U.S. including New York City. The victory of socialism is well worth millions of atomic victims!” and “Against those hyenas [Americans] there is no option but extermination!”

Angelina Jolie should really have her Che tattoo removed. We have the technology.

The Castro regime conspired with communists in Russia and around the world. They collectivized farms, confiscated businesses and forced hard labor. Cuba imprisoned homosexuals and committed scores of human rights violations. In Che Guevara’s Cuba there was no freedom of assembly and certainly no fair elections. Although Fidel transferred power to his brother Raul in 2006, oppression is a Castro family business.

So, stop embarrassing yourself and throw that Che t-shirt in the rubbish where it belongs. It’s a fashion statement, but not a good one.

El Che: The Crass Marketing of a Sadistic Racist

Che Guevara; a Study in Stupidity, Sadism and Failure

One Response to "Are You Really Wearing a Che Guevara T-shirt?"