Arthur Moriarty ~ “Reconnaissance by Fire” ~ VALLEY PATRIOT OF THE MONTH, HERO IN OUR MIDST 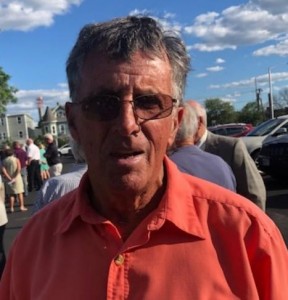 Just a few weeks ago, I was talking with Bill Bateman at the Merrimack Valley Golf Course, Bill connected me with fellow Central Catholic High School alumni Arthur Moriarty, of the Class of 1958.

Bill graduated from Central Catholic in 1961, as did I, graduating in 1979. Bill had asked me if I ever met Arthur Moriarty, a Vietnam Veteran; I had not.

Small world, Arthur had gone to Army Basic Training with my former neighbor Sean McCarthy’s brother, Brian McCarthy. Sean was also eating breakfast at Al’s that morning. I am learning the Merrimack Valley is an exceedingly small place.

When I was an undergraduate night student at the University of Southern Mississippi, I took a history course, taught by a professional librarian. During the class, I learned about primary sources and secondary sources. So, this article, is not going to be written by me, it is coming from Arthur Moriarty himself, his own firsthand account of his experiences in Vietnam, as he recalls them. A primary source account of the Vietnam War, in Arthur’s own words.

“Late 1965 news bulletin on the nightly news, married men without children are now eligible to be drafted. Next day I received my draft notice. I was twenty-five, married, with no children. I spent one year at Fort Hood Texas, where I was trained as a forward artillery observer.”

“In late 1966, I was assigned to the 1st Air Cavalry Division and sent to Vietnam. My first day in a combat area was Christmas Day 1966, myself and another replacement soldier enjoyed a turkey dinner.”

“We were then both flown out to LZ Pony, and later in the day, the other soldier was flown out to LZ Bird. He was selected because he was a Private First Class, I was a specialist, one rank higher.

The term LZ is shorthand for Military Landing Zone, some are very elaborate, with communication stations, defensive positions, and maintenance facilities, others, are simply a grassy field.

The next day LZ Bird was attacked and overrun, thirty-five US and South Vietnamese Soldiers were killed. My friend was killed, I took his radio call for help, he died talking on the radio, calling for support. The surviving US Soldiers gave me his bullet riddled radio to salvage for parts the next day.

The operating area we were in became very hot from that evening on. (Very hot means increased enemy engagement) I was sent out on foot patrols around the area, but later, the leadership moved me to the fire direction center.

This is where all the artillery fire missions are called in from. Artillery is always as far forward as possible, so it can support the infantry, known as grunts in Vietnam. When they needed help, we were just a call away, big brother with a big stick.

In addition, I flew some reconnaissance missions in our scout helicopters, looking for the enemy. This was remarkably interesting duty. When I was in the fire direction center (FOC), I was busy every day, shooting missions for patrols, ambush teams, recon teams. There were plenty of long days and nights, taking calls from soldiers in very precarious situations needing, medical, air, or artillery support.

It is tough when you know the guys that are calling you are your fellow soldiers, and they are in deep trouble. When I came home, it was a long time before I could sleep at night without thinking about them. Some nights I would cry in my sleep, about the nights spent on the radio talking to soldiers who were dying. We Vietnam Veterans were not over there fighting for God and Country, we fought for each other.

When I got out of the US Army, I tried to close the door on that part of my life, but never got over it. I have tried to visit the traveling Vietnam Memorial Wall, but I just cannot, I always melt down in the parking lot. I am proud to have served my country and, in a way, glad I saw combat, if anything life is sweeter knowing you survived it”.

This was Arthur’s account of his service in Vietnam, in his own words. Two things Arthur told me that stick out from our time together, the US Army’s practice of reconnaissance by fire, shooting a mission into a patch of jungle, just to see what was hiding in there.

The second was Arthur recounting how he rudely turned down an opportunity to attend Officer Candidate School after Basic, which resulted in his assignment to the Fort Hood Golf Course. Arthur was a trained Groundskeeper before being drafted into the US Army, his company commander, upset with Arthur’s rejection of OCS, changed Arthur’s assignment from maintaining the Fort Hood Golf Course, to a deployment to Vietnam as a forward observer.

Arthur said, had he been polite when talking to his company commander at Fort Hood about OCS, he would have spent his entire remaining US Army service, taking care of the greens on Fort Hood’s golf course.

My golf buddy Bill Bateman died shortly after introducing me to Arthur Moriarty, Bill served our Nation in the Massachusetts National Guard. My life is richer for having known both men. This article is dedicated to all those Americans who came of age in the 1960s, and served in our Nation’s armed forces during the Vietnam conflict, stateside or in country.

John Cuddy served in the US Navy’s Construction Battalions (also known as the Seabees) after retiring from the Navy; he earned a bachelor’s in history and a master’s in economics from the University of Massachusetts on the Lowell Campus. He has been employed in Logistics at FedEx for the last 24 years. If you know a World War II, Korean War or Vietnam War Veteran who would like their story told, please email him at John.Cuddy@Yahoo.com.◊

Arthur Moriarty ~ “Reconnaissance by Fire” ~ VALLEY PATRIOT OF THE MONTH, HERO IN OUR MIDST added by Tom Duggan on August 1, 2021
View all posts by Tom Duggan →

5 Responses to "Arthur Moriarty ~ “Reconnaissance by Fire” ~ VALLEY PATRIOT OF THE MONTH, HERO IN OUR MIDST"