By ValleyPatriot on May 6, 2008Comments Off on At 31, Breast Cancer survivor inspires councilor 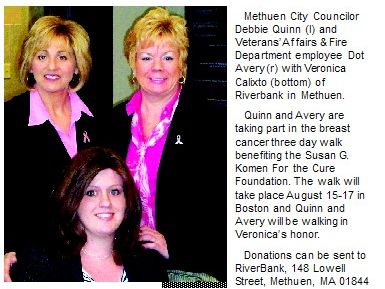 METHUEN – “We love her. We want to adopt her and take care of her, (and give her) anything she needs.”

Quinn and Avery are taking part in the breast cancer three day walk benefiting the Susan G. Komen For the Cure Foundation. The walk will take place August 15-17 in Boston and Quinn and Avery will be walking in Veronica’s honor. Veronica’s name will appear on their  t-shirts and anyone who makes a donation in honor of a loved one or in memory of someone will have that name appear on their t-shirts.

Quinn met Veronica at a recent Board of Trade meeting where Veronica was seated at her table.  “Her story is so compelling and moving and we knew that we needed to tell it,” related Quinn. “I noticed this young, pretty girl wearing a wig. She was speaking so bravely and confidently about the situation she was going through that I was overcome by the reality of her situation. She was facing life and death and yet was moving forward in a positive and optimistic manner. Right then and there I knew Dottie and I needed to walk in honor of Veronica,” concluded Quinn.

Veronica is 31 years old, married to Johnny and they have two beautiful, young daughters, ages 7 and 2. Veronica jokes that last year around January or February she began hearing commercials for the walk for cancer and heard the statistic that one in five women will be diagnosed with breast cancer.

She said, “I have four very close girlfriends whom I grew up with and we are in our 30’s and I used to say to them, jokingly, that one of us is going to get it.”

Then she recalled, “But that statistic of one in five kept playing in my head over and over and I decided to begin doing self exams.”

Several months later, in September 2007, Veronica became a statistic from that commercial when she found a lump. “Because I had no family history of cancer, a mammogram would typically not be performed until I was 40. As my case illustrates, women under 40 need to do self exams and go for annual doctor visits,” says Veronica.

“I was extremely angry when I found the tumor and I figured this can’t be happening to me. This is not part of my plan. This is not acceptable. But then I got over it and realized, thank God I found it!” she says.

Veronica immediately called her doctor, Dr. Kaul in Methuen, who scheduled a mammogram and biopsy at Holy Family Hospital.

“I am very grateful to her (Dr. Kaul) because she dealt with it very urgently. She called the hospital to get me in for a mammogram and biopsy and told them that I needed to be seen immediately,”

After the tests confirmed that Veronica had breast cancer, she then contacted Dana Farber in Boston for a second opinion.

“I had been watching TV and  following WCVB Kelly Tuthill’s story of how she was dealing with breast cancer and I contacted her plastic surgeon at Dana Farber, Doctor Donald Morris.” says Veronica.

Veronica had a 3 ½ cm tumor and was diagnosed with grade 3 cancer and, in December 2007, underwent a transplant mastectomy.

“I had a transplant mastectomy and a tummy tuck where the doctors used my own tissue for reconstruction. It led to a very difficult recovery and issues with the healing process. That is why I need to undergo a second procedure, because of issues with healing “ says Veronica. After the surgery in December, Veronica underwent both chemotherapy and radiation with her last radiation treatment on April 30th .
Veronica will be undergoing further reconstructive surgery this month and then will begin additional radiation treatment the first week of June and additional chemotherapy shortly after that.

“They were able to remove all of the cancer the first time but because Grade 3 cancer is the most aggressive type of cancer, and because I am so young, the doctors and I opted for aggressive treatment with both radiation and chemotherapy after this surgery,” she says.

After Chemotherapy the first time, Veronica lost her hair, eyebrows and eye-lashes. Her husband has “been amazing,” she says noting that he took several months off from work to take care of her.

“This month is our 10 year anniversary, and, hopefully, we can go out for dinner to celebrate.”

Her mother also helps take care of her and has taken her for treatments. Her seven year old  daughter is quite aware of the situation and they have included her in what Veronica is going through, explaining the process to her, so she will understand.

“I have taken her to chemo and we have met with a councilor. She is having a very difficult time with it.” Veronica began to cry while talking about her daughter.

“The other day, she came home from school and asked Mommy, “Are you going to die? Because kids at school say that people with cancer die.” Veronica then had to reassure her daughter. Her two year old sees what is happening to her mother but is too young to understand. According to the American Cancer Foundation, an estimated 182,486 NEW cases of invasive breast cancer will be diagnosed in 2008.

“These figures are staggering,” commented Quinn.

Veronica is not able to walk with Debbie or Dottie this year, but excitedly says, “I will absolutely be walking with them next year.”