By Tom Duggan on February 17, 2013Comments Off on Austin Prep.’s Girls Varsity Hockey Heats Up 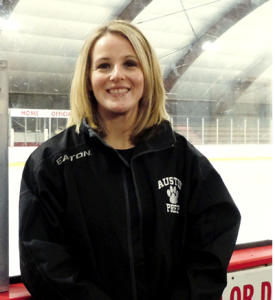 READING – Austin Preparatory School’s Girls Varsity Hockey season is heating up, thanks to the leadership of new Head Coach Stephanie Wood. The team has worked its way back into the top 10 and is on the verge of potentially ending a two-year postseason drought. Wood is currently the Women’s Director of the Islanders Hockey Organization, one of the largest youth hockey clubs for boys and girls, as well as juniors athletes, in New England.Coaching a school team is just the new challenge and opportunity she was looking for.

“I want to make this program one of the top programs in the state,” Wood said about Austin Prep’s Varsity team. “I’m a very driven and competitive person and I want this program to be the best.” The Cougars, led by standout seniors Shannon O’Neil of Tewksbury and Kiely Annese of Billerica, are a team with young talent, Wood said. More than half are freshmen and sophomores, and four eighth-graders are among the ranks.

“Two years from now, they will be very dangerous,” Wood said. “The team is a young, talented group of players who will flourish. They are hungry to be a competitive group.”

Wood said there is more to coaching hockey than teaching skills. The sport teaches you how to be a competitor, how to both win and lose gracefully, and how to exhibit true sportsmanship. These are lessons she hopes to pass along to the young Cougar team.

“Hockey has been a huge part of my life since age 5,” she said. “When I was young, I didn’t realize how much hockey would influence my life skills down the road. Now as a coach, I hope to pass along these same values to my upcoming young players.”

Wood has been making a name for herself in women’s hockey since she was a young girl. Growing up, she graduated from high school as the most accomplished athlete in her school’s history. Wood was a four-time Athlete of the Year, competing in six different sports and serving as the captain of her school’s Varsity Soccer, Basketball, and Hockey teams. She set school records in both hockey and basketball and received the league’s Most Valuable Player award as the top player in the conference.

From there, Wood was recruited to attend the renowned North American Hockey Academy, which is one of the premiere girl’s hockey institutions for high school aged players in all of North America.

A graduate of Northeastern University in Boston, Stephanie attended on a full athletic scholarship where she played Division I Hockey playing both forward and defense. While there, the team was nationally ranked and made two Hockey East Finals appearances. She is one of the few student-athletes at Northeastern to play two Division I sports – she played Varsity Basketball during her final year after completing her hockey eligibility. She received a bachelor’s degree from Northeastern and a master’s degree with High Honors from Boston University, where she was also awarded a full fellowship as the University’s Fitness Graduate Assistant.

Wood has competed in numerous United States and Canadian National Hockey Championships, and even led her team to a Bronze Medal at the 2010 USA Hockey National Senior Championships. She finished as the second leading scorer in the nation that year.

For a complete list of Wood’s numerous accomplishments and achievements, go to the official website of the Islanders Hockey Club, www.islandershockeyclub.com/staff.