By ValleyPatriot on December 22, 2014Comments Off on Awareness for COPD – 3rd Leading Cause of Death 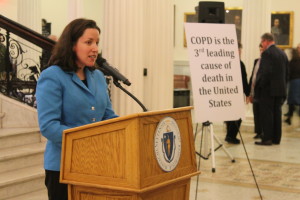 Chronic Obstructive Pulmonary Disease (COPD) is the third leading cause of death in the United States. It disproportionately impacts women and is caused by smoking and poor air quality. It severely impacts quality of life by causing a shortness of breath, which makes it difficult to do the most basic things and carries significant health care costs. In 2008, the cost to the nation for COPD and asthma was estimated to be approximately $68.0 billion in healthcare expenditures and lost productivity. Although there is no cure for COPD, early detection is essential to manage the symptoms that are caused by COPD and improve quality of life.

In 2012, the legislature created a special commission to investigate and study strategies to promote public awareness and increase knowledge of the causes of COPD and the importance of early diagnosis, effective prevention strategies, and disease management. I was appointed by the Senate Chair on the Joint Committee of Public Health as his designee to chair this commission. It is in the final stages of appointments by the Governor and I am ready to begin this important work.

While COPD isn’t the most commonly known or understood disease, its impact on health, death and health care costs is significant. Chronic Obstructive Pulmonary Disease (COPD) is a term that refers to two lung diseases, chronic bronchitis and emphysema. The term COPD is used because both diseases are characterized by obstruction to airflow that interferes with normal breathing, and the two frequently co-exist. COPD is the name for a group of diseases that restrict air flow and cause trouble breathing. COPD includes emphysema and chronic bronchitis.

Although tobacco use is the primary cause of COPD in the United States, air pollutants at home (such as secondhand smoke and some heating fuels) and at work (such as dusts, gases, and fumes), and genetic predisposition also can cause COPD. Other risk factors of COPD include exposure to air pollution, secondhand smoke and occupational dusts and chemicals, heredity, a history of childhood respiratory infections and socioeconomic status.

Last year, I sponsored a bill that would require the use of pulse oximetry screenings for newborns to enhance the possibility of detection of congenital heart defects in infants. This year, I plan on filing a bill that will expand pulse oximetry screenings to adults. Pulse oximetry screenings could have a valuable role in determining long term oxygen therapy criteria in patients with COPD. This is a noninvasive test that can be done during your annual physical that estimates the percent of oxygen in your blood.
I look forward to serving on this commission and finding ways to address awareness of this disease as well as effectively treating and diagnosing people.