By Tom Duggan on September 28, 2015Comments Off on B-Street Bombers Still Rocking After 35 Years (INTERVIEW) 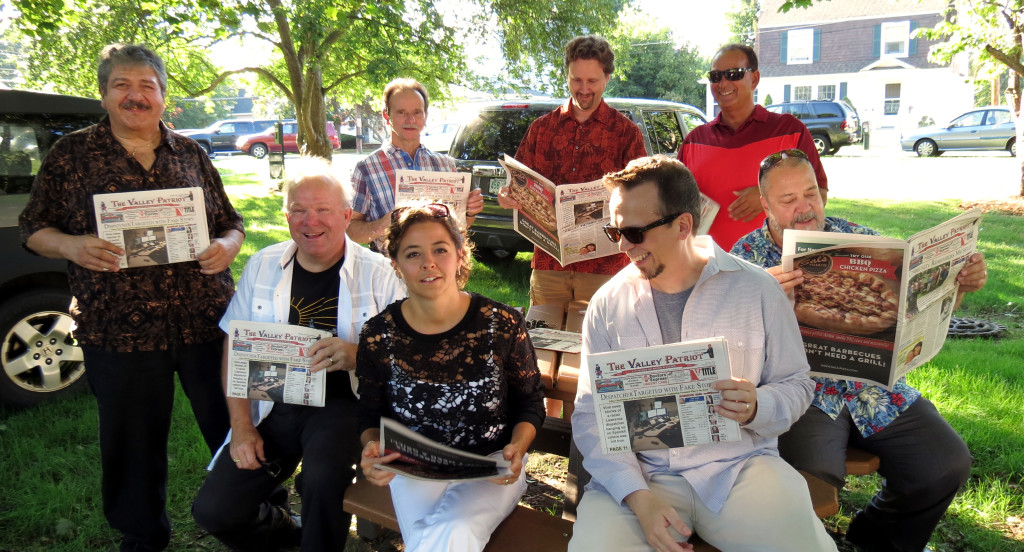 This year marks the 35th anniversary for the B-Street Bombers, a legendary local band from Lawrence. Last month, Valley Patriot publisher Tom Duggan and his assistant Stephanie Jaskot sat down with the Bombers in Plaistow, NH before an afternoon summer concert at town hall.
Present were: *John Tomaselli from Lawrence, *Jimmy Bass from Lawrence, Mandy Powers from Hudson, NH, *Mike Grady from Bradford, Steven Goddu from Salem, NH, Mike Casey from Lawrence, Dennis Brunel from Lowell, *Jim ‘Norris from Lawrence [* = original members]
Tom: “It’s your 35th anniversary of the Bombers, for the original band members, why did you start the band?”

John: “To play music and have fun.”

Jimmy “We came from [the band] M-Taboo years ago.”

Tom: “So, you started the band just to have fun? Like you were hanging out in your basement one day and just chatting?”

Jim: “No, it was a transition from M-Taboo into B-Street, just to have a good time on the weekend. So, basically weekend warriors.”

Tom: “How long did it take you guys to get really big?”

Tom: “For the new members, when did you guys start in the band?”

Mike Grady: “By a former member, I met him at a gig and I was playing with another band, he told me about B-Street and I came out and saw B-Street at the Sahara Club. I was completely blown away by them, and within 6 months I was a member.

Tom: “Was someone in the band that left or did they just add you as a player?”

Mike Grady: “They added me cuz they didn’t have a trombone player, there’s not many of us left (laughing).”

Tom: ”Mandy when did you join?”

Tom: “How did you get into this all-guy band thing going on? How did that work?”

Mike Grady chimes in: “well look at her!” (Laughing)

Mandy: “A friend of mine was playing keys at the time and he told me they were looking for a female vocalist, so I came down and tried it, and they liked me and kept me around!”

Tom: “So, for you guys, you went from an all guy band and a dominant male voice, right? That’s the signature voice of the band, and all of a sudden you brought a girl in, how did that work? How was the transition?”
Mandy: “Yeah, how did it work guys?!”

Jim: “Well, we still have a male vocalist, all we did was have them tag team each other and it expanded our repertoire. We were able to do more material that we couldn’t do before, because the lack of a female vocalist.”

Tom: to Mandy “How long have you been with the band?”

Tom: “Do you guys notice a difference in the people who are coming to see you now that you have a female vocalist, or is it kind of the same?”

Jim: “The people who usually come to see us are all grand-dad’s, (laughs) now it’s an entirely different crowd, there’s children and families.”

Steven Goddu: “Mandy’s brought a lot of new tunes to the band, youthful, and some we even play. (Laughs). Most of the band has a big repertoire with a lot of oldies but Mandy’s brought in a lot of new stuff that’s on the current hit list, and it makes a difference with the audience, a big difference.”

Tom: “Have you guys noticed any difference now that Mandy is in the band with promoters, such as them wanting to put her up front and kind of push you guys to the back?”

Jim: “This is a highly democratic band, and we want to share everybody’s pain and joy.”

Tom: “So, now it’s your 35th anniversary, did you guys ever think way back when that you’d still be doing this, 35 years later?”

John Tomaselli: “I knew I’d be playing in some venue.”

Jim: “I’d like to thank B-Street cuz that’s where I live.”

Tom: “How did you guys come up with the name B-Street Bombers?”

Jim: “It actually started out as a softball team raising money for cancer. I got a call to see if I wanted to start a weekend-warrior-type band, and we went with that name because we liked it. A lot of us live on streets with a ‘B’. Me and my brother, (who was the lead singer at the time), lived on Bromfield St, some lived on Bennington St., that’s why we originally called the softball team the B-Street Bombers, so we just carried it over from the softball team.”

John: Yeah, it was the Bromfield St. bombers softball team.

Tom: “So, now you’re at your 35th anniversary, you’ve had members come and go, you’ve had some guys come back, what’s it like now looking back after 35 years that you guys are still doing this?”

Jim: “It’s a wonderful musical review. I don’t even consider it a band at this point. I consider it a review. We’re having a good time, we get to play our music and execute it the best that we can, and that’s all I’m into it for, just to have fun. Like, playing a good game of tennis.”

John Tomaselli: “I don’t know, just doing it so long we’ve played a million places…”
Jim: “I think it’s song selection too, we tried to pick songs that we know are going to get under people’s skin.”

John Tomaselli: “I recall one time someone said we kind of fit a void, there were a lot of bands that were doing Doors tribute, this tribute, that tribute, and there wasn’t any doing the Bruce Springstein, Bob Segar style, so, we kind of did that, you know, everybody else was just a basic rock band, a hair band, we were different than that.”

Jim: “We took a left turn with all the horns and we took it into the 20’s [music -wise]. We brought the classsic show band style back.”

Tom: “Are you guys surprised with the sound that you have that you’ve continued to last?”
Jim: “Everything recycles.”

Tom: “Where do you guys want to be five years from now?”

Tom: “Do you want to play local or do you wants to play big arenas?”

Everyone agrees they want to continue playing locally.”

Tom: “Are you guys making money? Or does it have to get split so many ways now that you don’t make much?”

Mike Grady: “Are you from the IRS? We don’t make any money, in fact we lose money! Haha.”

Jim: “Probably enough to go out to dinner with your wife.” (Laughing)

Mandy: “We’re not in it for that purpose either.”

Tom: “ When people are reading this interview, what do you want them to walk away thinking about the B-Street Bombers?”

Jim: “Follow your passion, that’s what we do, I hope it shows because we love what we do.”

Tom: “What made you new players want to come play for the B Street bombers?”

Dennis: “ I’ve always wanted to play in a band with multiple horn players ‘cause I love that sound. And again, I heard of the B Street bombers probably in the early 90s, so it was an opportunity. They needed a keyboard player, so I came down and it was a lot of fun. A lot of joking around…fun. People see us on stage, they see we are having fun, so they have fun. It’s like, it rubs off…I’m fortunate to be a member now. I joined the band about 6 years ago, I was in a band called ‘Groove Alliance’, before they broke up… and I actually started drumming in a punk-rock cover band to be honest with you. Now, I’m singing Earth Wind and Fire, and Chicago and whatever, but it’s an absolute pleasure. This is a family to me, you know. I feel very fortunate to be a part of it.”

Not present for the interview: Mike Varraso- (lead vocalist). Russ Ryan -trumpet, Lue Garafolo, and Tommy McQuillan (drummer) who just had surgery and couldn’t be here for the interview. Congratulations B-Street Bombers!