By Tom Duggan on November 5, 2022Comments Off on Bad Sisters ~ TV TALK with BILL CUSHING 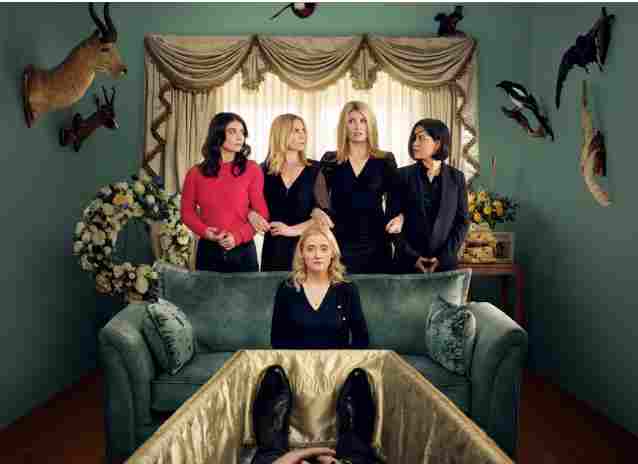 When it comes to murder, some things are best kept in the family.
The phrase, ‘Keep it in the Family’ never held more weight than it does in ‘Bad Sisters,’ AppleTV+’s outstanding new series that premiered on Aug. 19th.

John Paul “JP” Williams (Claes Bang, fresh off The Northman) is an objectively terrible person. They call him the Prick, and that’s putting it nicely. He throws elbows at work, pokes at family members’ wounds, spies on people and blackmails them. He’s racist, homophobic, misogynistic—you name it, he hates it.

“I think they dipped him in vinegar before they handed him over” at birth, his elderly mother muses. No one suffers more from his behavior than his wife, Grace (Sex Education’s Anne-Marie Duff), a meek woman who absorbs constant physical and emotional abuse from JP.

Lucky for Grace, she has four fiercely devoted Irish sisters who’d go to great lengths to liberate her. They even discuss and fantasize about killing JP for Grace’s sake. So, when JP dies under bizarre circumstances and his death is nonetheless ruled an accident, it doesn’t seem unreasonable to wonder if the sisters may be responsible. ‘Bad Sisters,’ a wickedly funny, genuinely poignant series created by ‘Catastrophe’ actress Sharon Horgan, takes its time recounting what really happened.

As Grace’s family gathers for the funeral, it quickly becomes clear that John Paul’s death was probably not an accident, and her sisters seem to be hiding quite a lot of secrets. You see, each of the sisters has been wronged by JP over the years, and we are told those stories over the course of the 10 episodes. Across two timelines, one beginning six months before John Paul’s death, the other immediately after, we learn of the many reasons people wanted the man dead and multiple bungled attempts to kill him.

However, it’s to the show’s credit that it almost doesn’t matter who actually killed JP. What matters is the story of a family trying to save one of their own from years of abuse, and the lengths people will go to in order to keep each other safe.

That the show also finds not just moments, but reasons to make its characters and viewers laugh is a testament to how well its writing team can balance a tone that lesser writers may have screwed up. Even if it’ll be satisfying to learn exactly how JP dies, ‘Bad Sisters’ is less about the mystery and more about the relationships and how they get tangled into such an overwhelming knot along the way.

The writing on this series is among the best of the year, with some absolutely brilliant dialogue, and the cast is terrific. Boasting one of the best ensemble casts in recent memory, with strong performances across the board. Each actress has their moment to shine throughout the show. Claes Bang as JP plays his part perfectly, never once letting up on being the absolute worst person he can be. It surely takes a talented actor to make a character this repulsive.

Now available to stream on Apple TV+, ‘Bad Sisters’ is an incredibly entertaining dark comedy wrapped in a whodunnit and it’s a series that will leave viewers begging for more.

If you have any questions about TV, you can email me at BillsTVTalk@gmail.com. I will answer all of your questions and will feature some of the questions I receive in a future Mailbag column. Follow me on Twitter and Instagram @BillsTVTalk and on Facebook at BillsTVTalk for daily up-to-the-minute TV news and discussion. ◊