By Tom Duggan on September 20, 2007Comments Off on Bank Pulls Funding on Monarch After Bogus Asbestos Story Appears in Tribune 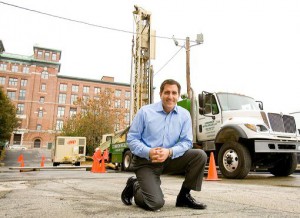 Sustainable developer Bob Ansin has pumped $25 million dollars of his own money into the Monarch on the Merrimack project (MIRACLE ON MERRIMACK ST) to revitalize the old Wood Mill on Merrimack Street in Lawrence, but a malicious front-page story in the Eagle-Tribune (TRIBUNE HIT PIECE) alleging asbestos in the building has cost Ansin $40 million in additional funding just one day after the paper erroneously reported that “workers in Tyvek suits and respirators were on site Thursday clearing the contaminated material out of the building.”

“We were upset when we read that article, because there are no asbestos issues in the building,” said Ansin.

The Eagle-Tribune story by Jill Harmacinski and Bill Kirk, published on Sunday, September 16th, stated that the Monarch project was running short of funds to complete the first phase of the three-phase project.

Ansin, however, says his project will continue and that the construction on Monarch will be suspended “for several months while we meet with banks to secure additional funding. One thing for sure, this project is moving forward. I am not leaving Lawrence. I have made a commitment to this city, and I am keeping that commitment. This is a $40 million dollar setback, but I am very confident that the project will continue and we will secure the funding we need to make Monarch a success, not just for us but for the city of Lawrence and the Merrimack Valley.”

Ansin was slated to receive the additional $40 million from a California-based bank. He received a call last week from the bank saying that the funding had been approved. However, less than 48 hours after the Eagle-Tribune’s bogus story on the asbestos at Monarch appeared on the front page, the bank changed their mind and pulled their commitment to fund the project.

“The bank cited the Eagle-Tribune story as a reason for pulling their commitment,” said Ansin. The Tribune issued a correction buried in pages of the paper about the asbestos on Tuesday, September 18. “But there’s a huge difference between a cover story that alleges asbestos in the building, and a tiny correction on page two.”

Ansin also responded to the Tribune’s claim that he is behind on his payments to the Merrimack Valley Regional Transit Authority. Ansin says he has a legitimate concern about the no-bid parking contracts at the MVRTA and decided to withhold payment until they could demonstrate that the contracts were legal, something the MVRTA has not yet been able to do. This issue will be covered in depth in an upcoming Valley Patriot story.

PART II: Ansin discusses the effect of the bogus Tribune story on Monarch buyers who already put money down on condos.