By Tom Duggan on January 5, 2018Comments Off on Be the Change… ~ ROBINS KITTY CORNER 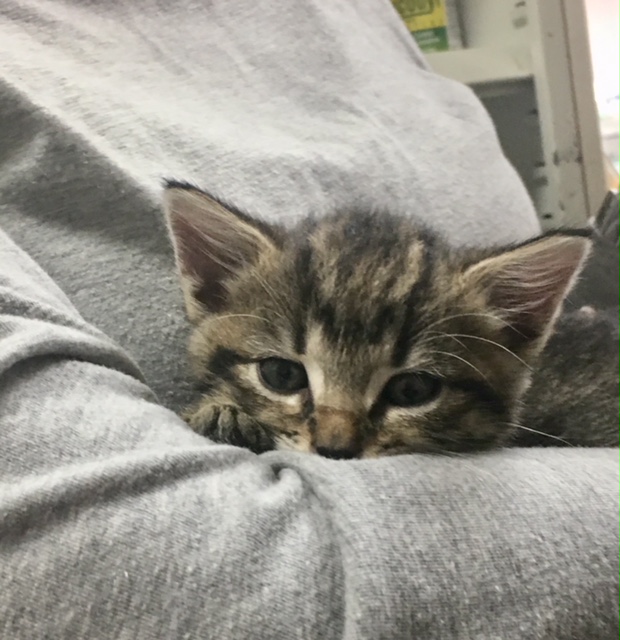 As I was strolling through the mall doing some early Christmas shopping, I saw a sign that said “Be the change you want to see in the world.” I’ve never been the type to embrace those corny sayings, but something about this particular sign struck me. I suddenly realized that I have been doing this without even realizing it, and that it is largely due to my volunteer work with the cats. Somehow, the animals have made me a better person. Let me explain.

In my entire life I had never done any type of community service or volunteer work. I know that sounds terrible, but when I was growing up, volunteering was just not part of the curriculum like it is today. I had donated money to various charities over the years, but I hadn’t actually done anything. About 4 years ago, I began to rescue cats.

This happened purely by accident. I was at work one day and someone brought me a tiny kitten that they had found outside. I went back to get the rest of the kittens, and then the Mother, and then the rest of the colony. Thus began my volunteer work with the cats. Today, I mostly trap cats for TNR (Trap-Neuter-Return), rescue strays so they can be put up for adoption, and foster cats and kittens.

As I continued to rescue cats and do volunteer work with the MSPCA, I began to look at things differently. I was no longer in one place in the city just doing my job. I was walking around in all kinds of neighborhoods, meeting all kinds of people, and seeing all kinds of problems. I began to think in terms of the community. I wanted to improve things. Over time, I began to realize that helping animals and helping people are closely related and often intertwined. I’m not only helping cats, but I am helping people who are helping cats.
Oftentimes what I am doing is very small and very ordinary. I am telling people about low cost spay/neuter programs and vaccination programs.

I talk about the importance of microchipping and keeping cats indoors whenever possible. I am helping someone catch a stray cat in their back yard. I bring people food to feed the feral cats that they are feeding and straw for their outdoor cat shelters. I hear that someone opens their garage to keep a feral cat warm. I bring them a cat shelter with a heated bed that a friend has given me. I pick up trash. I bring people food and clothing. An elderly man asks me to feed his cats while he is away. I can see he needs help. I clean his apartment. I could look the other way, but I do my best to help. Small things.

It’s really not about any of these things in particular, though. It’s about helping people, educating, informing, and being kind. It’s about giving and expecting nothing in return. It’s about trying to make the world a better place for people and for animals. It’s about being that change that I want to see in the world.
Robin Desmet is a super awesome person and we love her. She’s a pharmacist at Packard Pharmacy and helps rescue kittens.