By ValleyPatriot on April 17, 2014Comments Off on Bettencourt’s Retirement Marks the End of an Era on the Field and in The Classroom 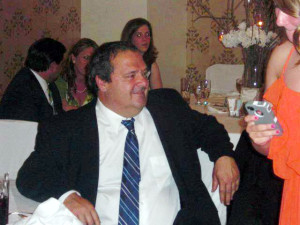 While this special 10th Anniversary edition of The Valley Patriot represents a wonderful accomplishment for this publication, it also represents a personal milestone for the Bettencourt family. This month, the career of a man who is both very special to me and the Merrimack Valley region came to a close. After 37 years in education, my dad, better known to most as Coach Bettencourt enjoyed his last day in the classroom.

Growing up, my dad wanted to be a lawyer. Being raised in a large family provided him effective training in argumentation and the profession promised an attractive salary. Wealth was not a luxury my dad experienced during his younger years in Peabody, MA. But it was in that humble upbringing that he found his love of athletics. Sports, especially baseball, provided inexpensive opportunities to exercise his competitive spirit.

After immensely successful careers in baseball and football at Peabody High School and the University of New Hampshire, where he was an All-American, my dad faced the fork in the road that all amateur athletes eventually face—“what’s next?”

He returned to the North Shore to find answers and was offered a substitute teaching and assistant football coaching position at North Reading High School. It was there that he discovered that the ball field was simply an extension of the classroom. In both arenas, teaching was the centerpiece and effective teachers could make a real difference in an individual’s life.

From there, he went on to teach at Central Catholic. Central provided him with his first head coaching job, allowing him to take over the baseball program in the highly competitive Merrimack Valley Conference. It was the perfect place for a young coach to cut his teeth and experience inevitable growing pains. It also was his first of dozens of Merrimack Valley Coach of the Year honors.

But it was at Andover school system and the University of New Hampshire that he would experience his greatest successes and spend the majority of his educational career. In the late 80s, he took over the Golden Warrior program at Andover High. His time there would include four Massachusetts State championships.

In 1993, he took his career to the collegiate level taking over the struggling UNH baseball program. His first year there, the Wildcats earned their first winning season in a decade and he earned Atlantic 10 Coach of the Year honors. Staying in New Hampshire, he coached at Salem and Winnacunnet High Schools winning a New Hampshire state championship in the process and became one of the few high school coaches in New England history to win state championships in two states.

To be sure, his teaching and coaching style weren’t for everyone. He took a no-nonsense approach and refused to accept excuses or laziness. He demanded more from students and players than they thought they were capable of producing. He demanded results. To him, teaching was the same as coaching. The arenas may be different but the principles are the same. They were the values that caused his son to become a conservative Republican. Such an approach frequently chaffed against the emerging political correctness that has since overwhelmed our educational and athletic programs. But despite this rough demeanor, few cared more about their students and players as individuals than my dad. No matter what happened on the field, my dad was always their biggest fan and was only a phone call away if something was wrong.

Dave Bettencourt’s retirement from teaching is not the only era that has concluded. It is unlikely that high school athletics in New England will ever again see the likes of Coach Bettencourt. Union rules in public education dictate preferences in coaching positions to internal candidates, usually teachers in the system. Coaching experience, success, and effectiveness have taken a back seat to uncontroversial coaches who keep parents and administrators happy. My dad’s retirement not only closes the chapter on his teaching career, but on a no-nonsense brand of coaching in high school athletics.

The next chapter of my dad’s life will certainly include teaching and mentoring, along with some quality time with his adoring granddaughter, Ava. Offers to join Major League Baseball as a coach or scout have been considered. But whatever the future holds, his legacy will be the positive impact he has had in the lives of his students and players and the joy he feels when they succeed in sports or in life.

On behalf of mom, Katie, Shannon, Ava and thousands of former students and players, we love you dad.