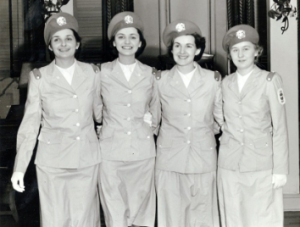 Boston– This month marks the first official time in the country of formal recognition by proclamation of the United States Cadet Nurse Corps (USCNC) under the provisions of legislation filed by State Senate Minority Leader Bruce Tarr (R- Gloucester) and signed into law by Governor Charlie Baker. The bill, co-sponsored by Representative Dave Robertson (D Tewksbury), declares July 1st of each year to be proclaimed as “United States Cadet Nurse Corps Day’’. It also requires the installation of a State House plaque, a first formal recognition of the USCNC in a government building.

The Cadet Nurse Corps, created by Congress in 1943, was successful in stemming an impending collapse of the nation’s health system. The country’s supply of nurses was desperately low following the First World War and the entry of the United States into World War II further exacerbated the crisis. 180,000 young women were recruited, enrolled and trained to address a critical shortage of available nurses.

Tarr said he, and Representatives who backed the bill, wanted to give long-deserved official recognition to cadet nurses from Massachusetts, women who voluntarily enlisted in the uniformed services of the United States.

“Our recent health crisis makes it much clearer to see and appreciate the contributions that these nurse cadets made during wartime to our state, to the nation, and ultimately to the world. Massachusetts has long been at the forefront of nursing education and healthcare and official recognition to honor these women is long overdue,” said Senator Tarr. “The commitment, care, and labor of these women, who averaged just 19 years of age, gave life, hope, and care to others. They have earned our respect and they deserve our thanks.”

Tarr’s bill will also cause a plaque to be placed in Nurses Hall at the State House. The marker will commemorate the 9,000 Massachusetts Cadet Nurses and will be placed with the cooperation and funding of the Friends of the United States Cadet Nurse Corps.

“The Cadet Nurse Corps was the largest group of uniformed women to serve the country and, it is the only uniformed service that has not yet been given the status and recognition that it rightfully deserves,” said Representative Brad Hill (R- Ipswich) a longstanding champion of the cadet nurses.
“The service and sacrifices that hundreds of thousands of nurses made during World War II will now be remembered for generations with the passage of this legislation and the placement of this beautiful plaque in Nurses Hall in their honor,” said Representative Ted Speliotis (D-Danvers).

“It was a pleasure to work with Senator Tarr on behalf of these women who not only fought for the lives of their countrymen in dangerous conditions, but did so while helping pave the way for women in the future to serve in the armed forces. Their professionalism, bravery, and patriotism saved lives and contributed to stopping the Nazis and Imperial Japanese, and saved the lives of allied soldiers around the world. They are true American Heroes for what they did, and I am proud that Massachusetts is recognizing their contribution to the Commonwealth and country.”

“The State House is our capital building and there are far too few markers or monuments to the impact that women have had on our society,” said Tarr. “I think it’s important that we change that; many of these surviving veterans are now in their 80s and 90s we just can’t thank them enough.”
Dr. Barbara Poremba, Director of the Friends of the United States Cadet Nurse Corps WWII, and Professor Emeritus of Nursing at Salem State University noted that these nurses were members of the US uniformed service and provided 80 percent of the military and civilian nursing care in the then 48 states, Hawaii, Alaska, and Puerto Rico.

“We have made history in Massachusetts, no longer are these women hidden figures. People should know what these young women did when their country needed them most,” said Poremba. “Let this be a springboard for our nation’s nurses.”

The placement of a plaque in Nurses Hall is fitting, said Poremba noting that 900 uniformed nurses assembled in early 1944 at the State House to begin their initiation into the corps. Each swore an oath to serve “for the duration of the war” not knowing when it would end. ◊