By ValleyPatriot on April 28, 2016Comments Off on Billions Is Worth Your Investment ~ TV TALK WITH BILL CUSHING 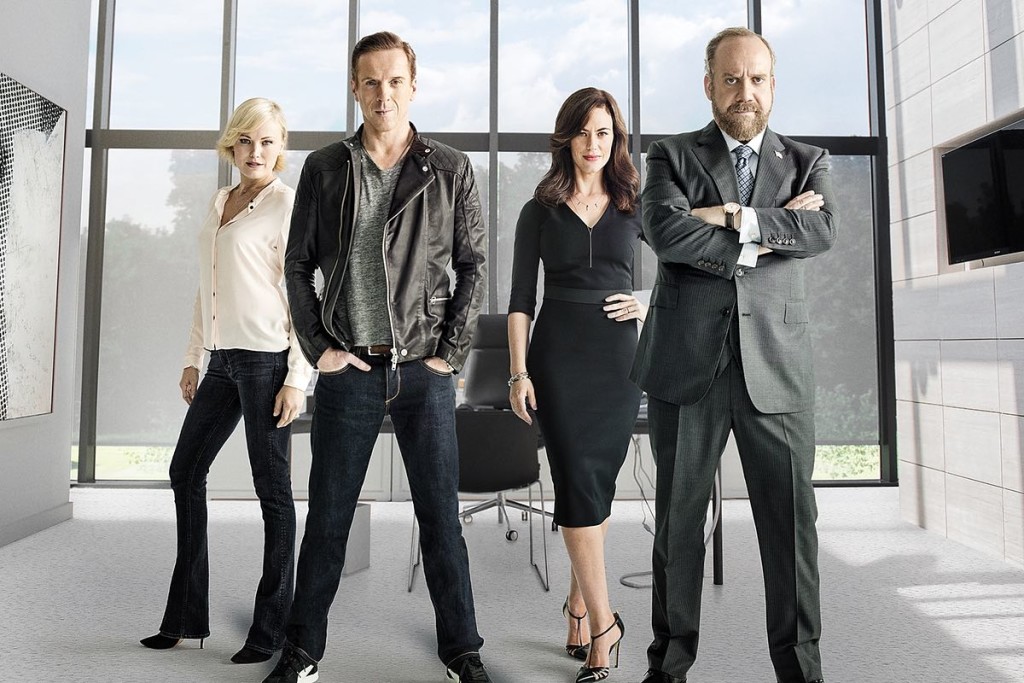 Showtime’s newest drama, Billions, is a fastly-paced series that centers on the battle between charismatic hedge fund kingpin Bobby Axelrod (Damian Lewis) and “win at all costs” U.S. attorney Chuck Rhoades (Paul Giamatti) who is obsessed with bringing down Axelrod and his firm, Axe Capital, for insider trading.

Both Bobby’s and Chuck’s wives also play major roles. Chuck’s wife Wendy (Maggie Siff) is Axe Capital’s in-house therapist. She has known Axelrod for many years prior to her marriage to Chuck. This obviously is a huge sticking point for Chuck and Wendy’s marriage, and also for Bobby and Wendy’s work relationship. After all, can Bobby trust her while her husband is trying to put Bobby in jail? Can Chuck expect Wendy to be supportive of him, while still working for Bobby? Bobby’s wife, Lara (Malin Akerman) can be just as intense as her husband. She is not going to let anyone hurt her family and what they built.

At times you don’t know who to root for, if there is anyone. Do you root for Bobby, the guy who built up his wealth and career from virtually nothing? Or do you root for Chuck, the guy trying to destroy Bobby? Like Bobby says in the pilot, “When did it become a crime to succeed in this country?” But as we come to find out through the course of the season, there is a lot to dislike about Bobby and how he got to where he is today.

The show really has no real heroes. Bobby and Chuck are very much alike. They both are calculating, manipulative guys that will stop at nothing in pursuit of their own personal goals and they don’t care who gets in their way of achieving them. They are characters that you love to hate.
The terminology of Billions is that of a complex, high level financial world, and can sometimes make the show a little convoluted. But the writers do a good job at helping those who are unfamiliar with this world understand.

The series has some of the best acting on TV this year. The scenes between Giamatti and Lewis are pure gold. You can feel the tension when they share the screen, and it’s riveting. But it’s not just them. The supporting cast is excellent as well. Breaking Bad’s David Costabile is excellent as Bobby’s right hand man, Mike “Wags” Wagner, more or less the chief enforcer of Axe Capital.

Billions is enjoyable in many ways with lots of interwoven stories and its soap opera-ish type storylines. Is Chuck really interested in justice? Or is he just out to make a name for himself? Is Axlerod really a man of the people? After all, he was the only member of his company to survive the September 11 terrorist attacks and built his company out of the ashes. Or was there more to it? He now pays for the college tuition of the children of his former partners. But even that makes us wonder about his ulterior motives.

Billions is a thoroughly entertaining series that has enough great writing and terrific acting to keep even the most finicky TV watcher satisfied.

Billions airs Sunday nights at 10 on Showtime and can also be seen on Showtime On Demand.
Do you have any questions about TV? Email me at BillsTVTalk@gmail.com. I will answer all of your questions and will feature some of the questions I receive in a future column. Follow Bill on Twitter @BillsTVTalk and on Facebook at Bills TV Talk for daily up-to-the-minute TV news and discussion.