By ValleyPatriot on June 9, 2018Comments Off on Bill’s TV Mailbag – TV TALK with BILL CUSHING 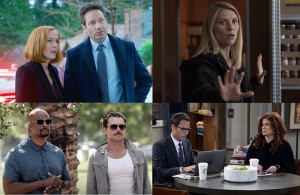 As a huge fan of The X-Files, I was very underwhelmed by the season finale. Please tell me they’re not going to end it there. With all the talk about Gillian Anderson being done with the show, it makes me wonder if the show has a future. – Alex from Newburyport, MA

Hi Alex. I couldn’t agree more. The season (possibly series) finale left a lot to be desired. While there is nothing set in stone, Chris Carter has continually said that everyone is open to continuing the series without Agent Scully. Carter says that he thinks the show still has life left in it, and that he never intended the season 11 finale to be the end of the series. My guess is that we haven’t seen the last of The X-Files in some form.

I really enjoy Lethal Weapon on FOX. Are we going to see a 3rd season? – Jo-Ann from Methuen, MA

Jo-Ann, a few weeks ago I would have told you that a third season of Lethal Weapon was a slam dunk. But over the last couple of weeks stories have surfaced of tension on the set between the 2 stars of the show Clayne Crawford and Damon Wayans. Crawford has reportedly been accused of emotional abuse and creating a hostile work environment. Reports also say that the relationship between him and Wayans has suffered irreparable damage. So at the moment, a third season is very much up in the air. Stay tuned.

When is this revival-mania going to stop? Twin Peaks, The X-Files, and Will & Grace among others… isn’t enough, enough? How about some new ideas? – Steve from Lawrence, MA

Steve, I couldn’t agree more. While I have thoroughly enjoyed some of the reboots and revivals, I would prefer new ideas on TV. But I hate to tell you that if you are not a fan of these revivals, then you may just want to shut off your TV for a while because they don’t appear to be going away anytime soon. Other revivals in the works include Murphy Brown, Magnum PI, The Greatest American Hero, Starsky & Hutch, Miami Vice, Party of Five, Mad About You, The Office, Cagney & Lacey, and yes even Blue Clues.

Homeland is having its best season in years, what can we expect next season? – Kathy from Nashua, NH

Kathy, I couldn’t agree more. This season has been great and has really breathed new life into the show. The show will move back overseas for season 8, with the action taking place in Israel. We can also expect a fairly big time jump in the series of at least 2 years. Unfortunately it was recently announced that season 8, due sometime in 2019 will be the shows last. Personally I think this is a good idea. As good as this season has been, I can’t help but wonder how much they can put Carrie through and still keep the show at least somewhat realistic. However it wouldn’t surprise me to see the show come back or continue in some form in the future.

Is there a website or Facebook page that I can follow to check and see if some of my favorite shows are being renewed or canceled? – Beth from Salisbury, MA

Beth, yes you can certainly follow me on Facebook and on Twitter @BillsTVTalk. I update the pages daily with breaking news of cancellations and renewals. Here are a few recent ones that you may have missed. Recently canceled: Here and Now (HBO), The Path (Hulu). Recently renewed: Billions (Showtime), NCIS (CBS), Grey’s Anatomy (ABC), Killing Eve (BBC America).
That’s it for this mailbag. Thanks for all the questions and keep ‘em coming!

Do you have any questions about TV? Email me at BillsTVTalk@gmail.com. I will answer all of your questions and will feature some of the questions I receive in a future column. For daily TV news, follow Bill on Twitter @BillsTVTalk and on Facebook at BillsTVTalk.