By ValleyPatriot on August 24, 2014Comments Off on Bill’s TV Talk Mailbag ~ TV TALK With Bill Cushing 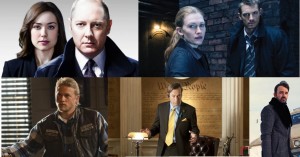 Bill, My favorite show is The Blacklist. Can you tell me anything about the upcoming season, are we going to find out what happened to Tom, and when will it be back? – Marion from Methuen, MA.

Marion, I can tell you that the producers have confirmed that we will learn of the fate of Tom before the season is over, and they also confirmed that we haven’t see the last of the character of Berlin. The show will return to NBC on September 22 at 10. However, enjoy it while you can. It will run until November 10, and then it will be taking a ten week break. It will return on Super Bowl Sunday and then move to its new night and time, Thursdays at 10. In casting news, Mary Louise Parker is joining the cast in a recurring role.
I’m so excited that Netflix has decided to bring back The Killing for one final season. What can you tell me about the new season? – Julie from Tewksbury, MA.

By the time you read this Julie, the show will be back. It premieres August 6th on Netflix. As far as what we can expect in this final season? Remember the character of Bullet from Season 3. Well she may be gone, but she is certainly not forgotten. Series creator, Veena Sud, said that the teen’s Season 3 death will continue to haunt Holder. “That was a game-changer in terms of Holder’s life,” she explains. “Up until that point, he was a homicide detective who had not lost anything in the course of his work.” Sud promises that there will be “a final moment” that will honor the Bullet-Holder relationship. This season’s case will revolve around a student at an all boys military academy whose family was murdered, and Academy Award nominee Joan Allen will be joining the cast.

Please give me some info on the final season of Sons of Anarchy. I need to know what’s going to happen. – Mike from Amesbury, MA
Well Mike, prepare yourself for one hell of a ride. According to Theo Rossi, who plays Juice, this season is going to be a bloodbath. He says, “People are dropping like flies, literally, every two seconds you’re like, ‘Oh, that person’s gone. There’s always a big clap-off it feels, every scene, every episode, somebody’s leaving.” Yikes! I can also tell you that the premiere is 1 hour and 45 minutes long, and picks up 10 days after the events of the 6th season finale. Sons of Anarchy’s final season premieres September 9th at 10 on FX.
I absolutely loved Fargo. I heard it was one season and done though. Is it coming back or not? – Sandy from Manchester, NH
I have some good news and some bad news for you Sandy. The good news is that Fargo is absolutely coming back for a 2nd season. The bad news is that none of the cast from the first season will be returning. Season 2 will take place in 1979 and will center on the Sioux Falls case that Molly’s dad, Lou, was describing in an episode at the end of the season. Producer Noah Hawley said that while the original cast will not return for season 2, he didn’t rule out some of them returning for a possible season 3. Fargo is slated to return in the fall of 2015.

I was a huge Breaking Bad fan, and I’m really looking forward to the spinoff Better Call Saul. Can you tell me anything about it? – Jimmy from Westford, MA

Better Call Saul is a prequel that follows Saul in the days before his dealings with Walter White and Jesse Pinkman — though creators have said the show’s timeline could move back and forth over several decades, including the years during and after Breaking Bad which means there’s the potential for Bryan Cranston, Aaron Paul and others to make cameos. There is no set date for Better Call Saul to premiere but it’s expected to hit the airwaves sometime in the last half of 2015.