By ValleyPatriot on August 25, 2019Comments Off on Bill’s TV Talk Mailbag ~ TV TALK with BILL CUSHING 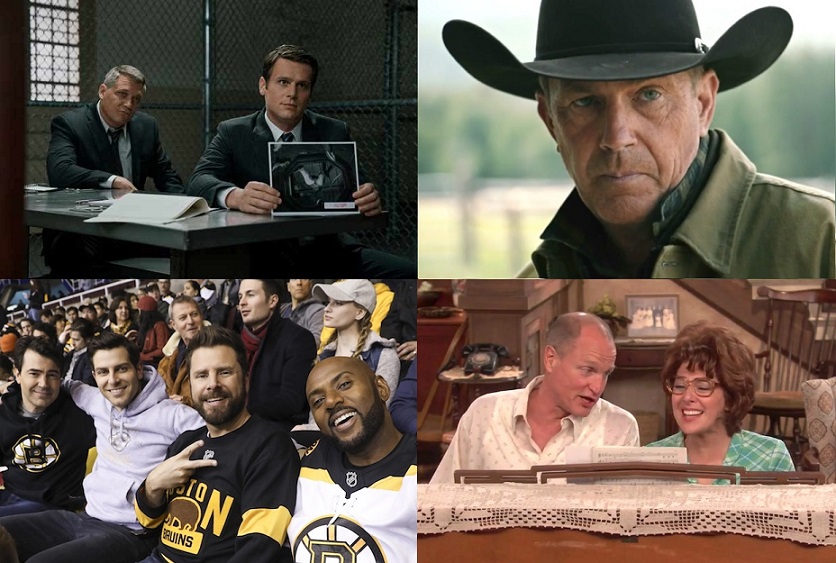 Hi Bill, I really enjoy reading your column. I loved the series ‘Mindhunter’ on Netflix when it was on. But how come there was never a second season of the show? It had such a great first season. Was it meant to be a one season show? Thanks! – Sharon from Haverhill, MA

Hi Sharon. ‘Mindhunter’ premiered in October of 2017 to rave reviews from critics and fans alike. For a while there it seemed like we’d never see another season. However, fear not, the series is returning. Season 2 premieres on Netflix on August 16. Season 1 took place in 1977, and the second season will take place a couple of years later in 1979 or 1980. It will center on the Atlanta child murders that gripped the nation’s attention during that time. There will still be plenty of scenes of the agents visiting serial killers in prison to pick their brains, and Charles Manson will be one of them. Let’s hope we won’t have to wait as long for season 3.

I’m a big fan of westerns, so I really love ‘Yellowstone.’ No one does westerns these days quite as good as Kevin Costner. Any scoop you can give me? Will there be a 3rd season? – Roger from Nashua, NH

Roger, ‘Yellowstone’ is a great performer for the Paramount Network. So much so that the series, which is midway through its second season, has already been renewed for a third. One thing I can tell you is that in season 3, Josh Holloway who you’ll remember as Sawyer from ‘LOST,’ will join the cast. Holloway will play Roarke Carter, a handsome, charming, shaggy-haired hedge fund manager with ambitious plans in Montana, and he’s sure to clash with the Dutton family.

My wife and I loved the recent live presentation remake of ‘All in The Family’ and ‘The Jeffersons.’ We thought it was such a great idea and so much fun to see some well-known actors take on these iconic roles. Any chance they may do something like this again? – Jerry from Newburyport, MA

‘Live in Front of a Studio Audience’ was very well received and it did very well in the ratings. Producers have expressed interest in doing more classic TV live shows. They have said they’d like to turn it into a more frequent event. Maybe several times a year or more. The question is which classic shows will they tackle next? Nothing has been officially announced yet, but many shows have been rumored such as Happy Days, Laverne & Shirley, Threes Company, Cheers, Sanford & Son, and Good Times.

Love your articles Bill! One of my favorite new shows last season was ‘A Million Little Things.’ Anything you can tell me about season 2 would be appreciated! Thanks. – Lisa from Ipswich, MA

I appreciate it Lisa, thanks for reading! I do have some information about season 2 of ‘A Million Little Things’ to share. We found out in last season’s finale that PJ, played by Chandler Riggs, who Rome met in the emergency room turned out to be Barbara Morgan’s son. Expect PJ’s story to be a big part of season 2. Speaking of Rome, when we last saw him, he was grabbing a pamphlet about suicide prevention, but it turns out it may not be what we think. Rome will be exploring the idea of helping people who are struggling with suicidal thoughts like he was. I’m also hearing that a brand new mystery will be prominent throughout season 2. According to producers, “Viewers may not be aware that they are already exposed to the mystery, but it’s already there and as we go into season 2, there is a new thing to follow that will play us throughout. A separate issue that is not related to Jon’s suicide.” We’ll see how it plays out when ‘A Million Little Things’ returns to ABC on September 26.

That’s it for this mailbag. Thanks for all the questions. Keep ‘em coming!

Do you have any questions about TV? Email me at BillsTVTalk@gmail.com. I will answer all of your questions and will feature some of the questions I receive in a future column. For daily TV news, follow Bill on Twitter @BillsTVTalk and on Facebook at BillsTVTalk. ◊