By ValleyPatriot on October 7, 2022Comments Off on ‘Black Bird’ ~ TV TALK with BILL CUSHING 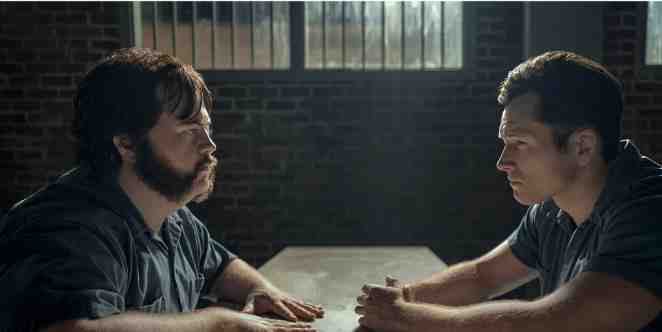 Chicago, 1996. Drug trafficker Jimmy Keene (Taran Egerton) faces a ten-year prison sentence. Then the FBI approach him with a strange offer: transfer to a maximum-security prison for the “criminally insane,” gather evidence to finally quash the appeal of suspected serial killer Larry Hall (Paul Walter Hauser), and Jimmy can earn his freedom.

That’s the story behind Apple TV+’s riveting true crime limited series ‘Black Bird.’ The too-wild-to-be-fiction premise comes straight from the real James Keene’s 2010 autobiography, ‘In With the Devil: A Fallen Hero, a Serial Killer, and a Dangerous Bargain for Redemption.’

The catch with the deal Keene is offered, is that it requires him to be transferred from a minimum-security prison to a high-security prison for dangerous and unstable inmates. It’s not a good environment for anyone, especially Keene since he is the son of a cop. Moreover, in order to keep a lid on it, no one in the maximum-security prison is to know that Keene is working with the feds (played by Greg Kinnear and Sepideh Moafi), who are concurrently trying to find the bodies of Hall’s victims.

Unfortunately, Jimmy’s ex-cop dad (Ray Liotta, in one of his last screen roles) blows his cover before morning tea. With crooked guards and a mob boss prisoner not missing a thing, the chances of Jimmy surviving, let alone succeeding, become increasingly slim. The best scenes are the cat-and-mouse exchanges between Keene and Hall, verbally dancing around each other to see who may break first.

‘Black Bird’ is loaded with stellar performances, starting with newcomer Laney Stiebing’s haunting turn as Jessica. Greg Kinnear is terrific as the small-town detective who trusts his gut and out-thinks the Feds, and Sepideh Moafi is magnetic as Lauren, the FBI agent who can see through Jimmy’s charms.

Ray Liotta, who died in June, stands out as Jimmy’s dad, an ex-cop who blames himself for his son going bad. Liotta’s gritty Jim Keene Sr. crumbles, emotionally and eventually physically, wondering if ever did enough for his boy.

Egerton turns in his most mature performance yet, complex and wrenching. Criminally overlooked for playing Elton John in ‘Rocketman’ a couple of years ago, he’s finally getting his due in this role.

Paul Walter Hauser is simply mesmerizing in his role as Larry Hall. Hauser plays him as a deeply creepy figure who is nonetheless rendered incredibly human. His menacing and haunting performance won’t ever be forgotten and ranks among the great on-screen serial killer portrayals.

‘Black Bird’ is written by Dennis Lehane, author of Gone Baby Gone, Mystic River, and Shutter Island, so it is perhaps no surprise of the show’s quality, but it is Lehane’s first time as a showrunner and he has shown an instant understanding of the genre.

‘Black Bird’ is the type of expertly written and crafted drama that makes it nearly impossible to point to any one section of the six-hour story and declare it the reason the show is so good. It feels singular moment to moment, yes, but it also has an impressively strong overall impact. In the end, it does something remarkably simple, something that true crime stories too often fail to do. “Black Bird” tells a great story and tells it well.

‘Black Bird’ is available to stream on AppleTV+.