By ValleyPatriot on October 30, 2017Comments Off on Black Cats ~ ROBIN’S KITTY CORNER 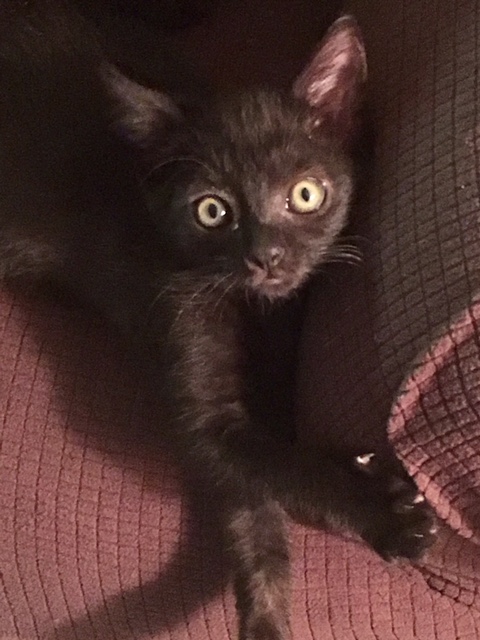 Halloween—a holiday for witches, ghosts, vampires, and the much maligned black cat. But what is it about black cats that brings out the haters?

The reputation of the black cat as an evil creature started back in Europe in The Middle Ages. In 1233, Pope Gregory IX claimed that Satan took the form of a black cat when walking on the earth. Many black cats were killed as a result. Stray cats were frequently seen in alleys being fed and cared for by lonely old ladies. Some of these disheveled old ladies became targets and were accused of practicing black magic and witchcraft. Their cat companions became guilty by association.

Superstition and fear of black cats continued during the 16th century. According to folklore, a father and son were traveling by foot at night when a black cat happened to cross their path. The pair began throwing stones at the defenseless creature, who ran into a nearby home where an elderly woman resided. The next day, the old woman emerged from her residence with bruises all over her body. The father and son began to spread the rumor that the old lady was a witch, and that she could turn herself into a cat at night in order to wander the streets undetected. Thus began the superstition that a black cat crossing your path will bring bad luck and that witches can take the form of cats at night.

In Massachusetts in 1692, the association of black cats with evil, witches, and death continued. The Salem Witch hysteria helped to fuel the fear of black cats and to further the idea that black cats were either witches in disguise or were the companions of women practicing witchcraft.

Fortunately for black cats, not all of the folklore surrounding their existence is negative. In ancient Egypt, all cats, including black cats were considered sacred. Cats were symbols of grace and protection and the punishment for harming a cat was severe.

Another myth about black cats is that they cannot be adopted during the month of October. Shelters do not want to see cats sacrificed, tortured, or used as an accessory to be discarded when Halloween is over. Despite this, most shelters do not restrict the adoption of black cats around Halloween. Instead, potential adopters are screened and interviewed prior to adoption, to insure that the cats are being adopted into the proper homes.

So, if you’re looking to adopt a black cat in the near future, just throw a pinch of salt over your left shoulder and head over to your nearest animal shelter.