By Tom Duggan on October 10, 2015Comments Off on Black Student Who Suffered Racial Slurs, Comments About Lynchings at Lowell High Says Administration Asked Him to “Move On” 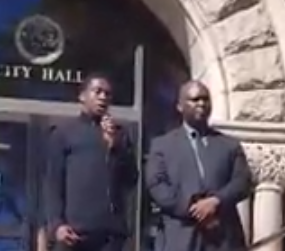 Black Lowell High School student Anye Nkimbeng was called a “nigger” in text messages by one of the losing candidates in the senior class presidential election, Tuesday, September 29th. Nkimbeng won the election.

The text was sent as a group text to several students while they were still in school. The text went viral and was posted on social media. Friends of the losing candidate posted additional comments with additional racial slurs.

SCHOOL COMMITTEEMAN’S SON NOT SUSPENDED WITH THE OTHERS

The losing candidate for class president who initially texted the racial messages, was Chris Gendron (18), the son of Lowell School Committeeman Steve Gendron.

In a statement to the Lowell Sun, Lowell High School Headmaster Brian Martin said that he could not release the names of the students involved in the racial attacks because they were all minors. The staff at The Valley Patriot has unearthed Chris Gendron’s voter registration at Lowell City Hall, listing his birthday as 18 years old. He was born on 5/17/97. (click here) 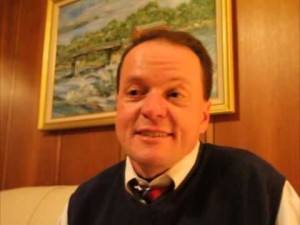 School Committeeman Gendron was out of town when high school officials contacted all the parents involved to appear at the school for a suspension hearing. School officials said that they could not reach Gendron’s mother on the day of the hearing either. As the result, 5 of the 6 students were suspended. Gendron was not suspended.

Because Gendron could not be suspended without a hearing, he was then allowed to run in the Lowell High track meet that evening.

Ironically, the Valley Patriot has confirmed that while Gendron’s parents were “not available” the day of the suspension hearing, his mother was able to attend his track meet that night to cheer on her son. The other five students sat home on suspension that evening, unable to participate in any school sports.

That prompted claims by students and parents close to Nkimbeng, that the school administration gave Gendron special treatment because his father is on the school committee.

Chris Gendron was suspended that day after the track meet. 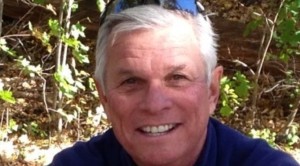 Headmaster Brian Martin served as Lowell City Manager and enjoyed the support of School Committeeman Steve Gendron. Gendron was a city councilor at the time and voted to make Martin the manager. Valley Patriot sources say that Gendron and Martin remain “good friends” and are in frequent contact.

Members of the Lowell School Committee told The Valley Patriot that they routinely get text messages, “sometimes several times a day” on just about every incident that goes on in the schools, yet were not notified when this incident happened.

The Valley Patriot has also learned that Headmaster Martin called a meeting of all the housemasters to allegedly investigate the incident. The only housemaster who was not called to attend that meeting was Gendron’s housemaster, the only Latino Housemaster at Lowell High.

Headmaster Martin issued a statement to his fellow administrators saying,  “We are working very closely with several supporting teams to turn this incident into a learning experience that would hopefully prevent further reoccurrence of similar incidents.”

ADMINISTRATION TRIES TO GET NKIMBENG TO “MOVE ON” 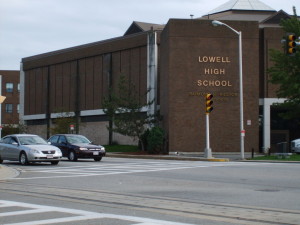 While Nkimbeng did not mention Gendron by name, he did say during his speech at city hall, that a housemaster asked him what it would take for him to just “move on.”

“Even after all this stuff,” he said to a crowd of about 60 supporters, “when one of the house masters came up to me to see what was going on, she didn’t ask me how I was feeling. Instead she asked me ‘what do you think we can do to move on?'”

The housemaster Nkimbeng was talking about is Deidre Haley. Sources close to the situation say that other officials including the headmaster himself, tried to squelch the incident, but that Nkimbeng would not let it go.

Members of the audience called for the firing of the housemaster as the student continued.

“It’s disappointing, it’s sad, it’s disturbing. They actually had the courage to say they did the right thing by calling the 12 other students’ parents saying ‘your son or daughter has done a crime.’ But, they didn’t have the respect or the courage to call me, or my parents, to say ‘your son has been victimized.’”

Superintendent of Schools, Salah E. Khelfaouihas promised a full investigation into how the high school administration handled the situation.

Nkimbeng said that he confronted one of the students who called for his lynching on social media after he defeated Gendron for class president.

“They actually said they wanted to lynch me. When I approached that student and said, ‘is it true you want to lynch me?’ All he did was, put his head down and said, ‘I was just joking’. As if ‘lynching’ is a joking word.”

* Election Held for Lowell High Senior Class President.
* Students texted racial slurs about Nkimbeng and it is posted on social media.
* Housemasters made aware of situation.
* Housemasters meets with a group of students who had their name appear in the social media. * The parents of the students involved in the incident were contacted to discuss the allegations.

* Throughout the day on Wednesday the headmaster says additional information was brought to their attention.
* Student interviews were conducted.
* Martin Apologizes to parents of Nimbeng and explain the situation.
* Wednesday afternoon, at approximately 2:30PM, additional information brought to Headmasters attention.
* Wednesday, 4PM. Headmaster Martin requested School Resource Officer, Sgt. David Peaslee, to meet and review all of the social media exchanges with Housemasters Haley, Slattery and O’Keefe.
* The only minority housemaster (a Latina) was not called to the meeting. The Latino housemaster happens to be Gendron’s housemaster.
* Sgt. Peaslee investigated and determined no criminal laws were broken.
* Wednesday 5:30PM. Headmaster Martin speaks with Lowell Sun reporter Amelia Pak-Harvey, saying he could not release the names of the students involved because they were minors.
* Wednesday 9PM. Headmaster Martin contacted the father of the class president at his home.

* Five students suspended.
* 8AM, Headmaster Martin reads public statement to the entire school over PA system.
* 9:30AM, Housemasters made final recommendations, and all students and parents were notified.
* Chris Gendron runs in Lowell High Track Meet.

Black Student Who Suffered Racial Slurs, Comments About Lynchings at Lowell High Says Administration Asked Him to “Move On” added by Tom Duggan on October 10, 2015
View all posts by Tom Duggan →