By ValleyPatriot on May 19, 2015Comments Off on Bloodline: TV’s Newest Addictive, Binge-Worthy Show ~ TV TALK with Bill Cushing 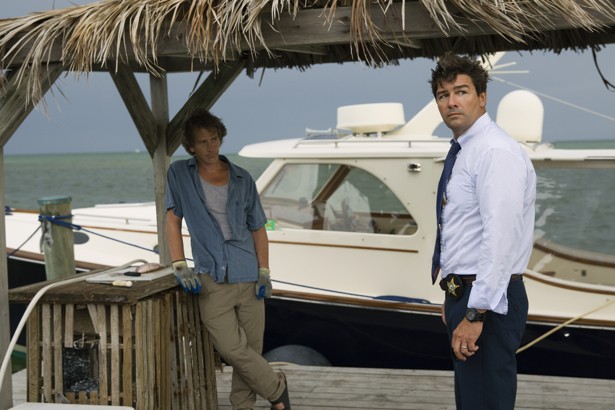 “Sometimes you know something is coming. You feel it in the air, in your gut. You don’t sleep at night. The voice in your head is telling you something is going to go terribly wrong and there is nothing you can do to stop it…. That’s how I felt when my brother came home.”

From the creators of Damages, Bloodline follows the Rayburn family, a tight-knit clan that is reuniting at their parents’ house in the Florida Keys. Sally and Robert Rayburn, played by Sissy Spacek and Sam Shepard, own the prosperous local hotel and have invited everyone to spend a weekend there celebrating the 45th anniversary of the resorts opening. But the festivities are overshadowed by the arrival of the black sheep older brother Danny, played masterfully by Ben Mendelsohn, whose presence dredges up the family’s history.

Immediately upon his arrival, Danny’s makes things very uncomfortable for his family. His mere presence dredges up bad memories of past events. Specifically, the accidental death of one of his siblings, that Danny was somehow involved in.

Emmy winner Kyle Chandler (Friday Night Lights) plays the middle brother John Rayburn. He narrates sporadically throughout the show, providing details into the personalities of his family and what they felt when Danny returned. John is basically the family watchdog, always trying to act like the father, even to his own siblings.We begin to learn more about the past and the pivotal moments in these characters lives through a series of flashbacks that appear throughout the series.

The show is set up, much like Damages, as an unfolding mystery. We know in the first episode that something happens, but we don’t know how it happened or what led up to it. The mystery of what happened in the past and what occurs in the future fuels the debate of who’s really good and who’s really bad and highlights how easy it is for people to cross that line between the two. The show teases us, offering little glimpses of the future and then bringing us back into the present, when the family’s many scars are revealed. This family’s got a secret buried in its past, and Danny is the only one who seems willing to address it.

Linda Cardellini (ER, Mad Men), Norbert Leo Butz, and Chloe Sevigny (Big Love) round out a top-notch cast that will surely be well represented when awards season rolls around. Mendelsohn and Chandler are sure-fire bets to get nominations.

One of the show’s strongest qualities is the pace at which the story is told. It’s a very slow burn, allowing the tension to build and build. It requires the viewer to be patient, and rewards you for that patience in the end.
“I’m going to tell you everything. It’s not very pleasant, but it’s the truth,” John tells the viewer. “Please don’t judge us…. We’re not bad people, but we did a bad thing.”

When the opening episode ends with those words, you’ll be hooked. The show has already been renewed for a 2nd season. It’s on Netflix with all 13 episodes available to binge on. Check it out, you won’t be disappointed. Bloodline is an addictive, masterfully written drama.

Do you have any questions about TV? Email me at BillsTVTalk@gmail.com. I will answer all of your questions and will feature some of the questions I receive in a future column. Follow Bill on Twitter @TVNewsandNotes and on Facebook at TVNewsandNotes for daily up-to-the-minute TV news and discussion. www.tvnewsandnotes.com