By Tom Duggan on January 24, 2016Comments Off on Book On A Mission: “Ward of the State” to Raise Money for Local Foster Kids 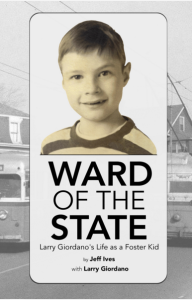 The story of one foster kid is on the shelves to raise money to help hundreds more. A small non-profit is taking aim at a huge goal. The Foster Kids of the Merrimack Valley is raising money to open a halfway house for kids aging out of the foster system. At the center of their efforts is a book detailing the true-life experiences of the charity’s founder, Larry Giordano, who grew up as a foster kid on the rough streets of Everett, Massachusetts in the 1950s and 60s.

“Growing up in the foster system wasn’t easy then, and it isn’t easy now,” Larry says. “I wrote the book to let people know how it was for me and to raise money to help these kids.”

He didn’t pull any punches telling his story. The book, entitled Ward of the State, details how Larry was abandoned in a hotel room as an infant and brought to live at his foster mother’s house. He was a handful right from the start. Larry and his friends ran their local park like a rogue nation, lighting kerosene fires, goading police officers, and refusing to back down from a challenge, whether it was rival gang on the baseball diamond or an all-out brawl on the basketball court.

Larry’s story, and his struggle for identity, culminates in outbursts of violence, an early enlistment in the military, and a passion for martial arts tournament fighting that would help define his life.

“It took more than two years to put it together,” says the book’s author, Jeff Ives. “We talked to neighbors, families, and friends to get the story straight, and Larry wanted to include it all. It has the cute stories about skipping Sunday School to get coffee and doughnuts, and rough stories that involve running away from cops after smashing up parking meters.”

The fact that Larry escaped arrest is a testament his foster mother, Helen Giordano, who was his steadfast guardian angel during those turbulent early years. While he lived in Helen’s house, she and her family did everything they could to help him feel safe and secure despite scarce financial resources and disapproving neighbors who were quick to label Larry as the “state ward” and an outsider.

Even after Larry came back from the Air Force, Helen welcomed him back to her house to stay while he worked and raised money to start his own life. Thanks to the stability she provided, and the discipline he learned from the military and martial arts, Larry achieved a lot from those humble beginnings. He opened a successful karate school, went on to serve in the Methuen Police Department, and was elected to a series of local offices, including State Representative.

In 2005, Larry and his wife Eileen decided to do something to help foster kids going through the same struggles Larry faced. It started by throwing holiday parties and providing Christmas gifts for kids who wouldn’t get them otherwise. They went on to provide academic supplies and backpacks to help foster kids fit in at school. During the summers they funded group outings to water parks and beaches.

Their latest goal is the biggest yet. If they are successful, they will raise enough money to open a home for kids aging out of the foster care system at age 18. These are some of the most at-risk kids in the community, just like Larry was. The stability of a halfway house will give them a strong foundation to build a life for themselves, the way Helen provided one for Larry.

“It would mean a lot for this book that tells what my foster mother did for me helps us do the same thing for the kids out there that need it.” Larry says.

About Ward of the State: Larry Giordano’s Life as a Foster Kid

All proceeds from the sale of this book go to support The Foster Kids of the Merrimack Valley, a 501(c)3 nonprofit dedicated to serving the needs of foster children in the Merrimack Valley, Massachusetts, including all of Greater Haverhill, Lawrence, Methuen, Andover, and North Andover. The book is available for purchase here: www.createspace.com/5736252 and on Amazon.com.

About the Foster Kids of the Merrimack Valley – We are a 501(c)3 non-profit organization dedicated to serving the needs of foster children in the Merrimack Valley including all of Greater Haverhill, Lawrence, Methuen, Andover, and North Andover. With hundreds of foster children in our local area, they need role models who can make a difference in their lives. Through the efforts of the organization, together with our community, our goal is to bring a positive influence into the lives of these children and support them as they grow. We offer a range of programs for local foster children of all ages. We work closely with the Department of Children and Families (DCF, formerly DSS) to make sure our programs are complementary and needed, and do not overlap with state and federally funded programs. Learn more here: www.fosterkidsmv.org

Book On A Mission: “Ward of the State” to Raise Money for Local Foster Kids added by Tom Duggan on January 24, 2016
View all posts by Tom Duggan →