By ValleyPatriot on January 31, 2017Comments Off on BOOK REVIEW ~ “Of Mixed Blood” by Ron Penczak 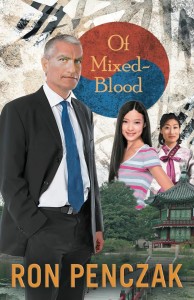 This story engages the reader quickly. The central conflict is revealed early, in the prologue.The plot centers on the conditions that lead to the main character’s present day dilemma and the steps that resolve that issue.

In the spirit of full disclosure I want to say that I am acquainted with the author, Ron Penczak, I belong to one of the writer’s groups Mr. Penczak speaks of in his acknowledgement. It was through this local connection and after reading several of his pieces that I became aware of his voice and his talent. When I learned he had written a full-length novel I knew I had to read it. I am happy I did. His writing never disappoints.

I enjoy books that let me escape. I truly love when that story whisks me to another time or place, this book does both. Mr. Penczak takes us on an interesting journey. Though most of us will never travel this particular road it is nonetheless a story familiar to most of us. Who of us has never felt out of place?

The novel, though fiction, is the story of many people, particularly men who for one reason or another find themselves alone in a foreign country for an extended period of time. How this protagonist deals with his loneliness and his new lifestyle make up the basis of the story.
Love, betrayal, government affiliations all intertwine to make this a pleasurable but disturbing read. The time period is the late 1970s early 1980s. Those of us familiar with the Carter Administration will recognize some of the names mentioned.

I might have wanted to read less on the workings between the defense company, the military, and contractors, but though at some points it seems excessive and incidental there is really a reason for its inclusion, one that becomes clear as the story progresses. It is because of a weapon’s issue that brings our man to Korea.
I would’ve liked more detail on the Korean cultural sites mentioned but that wasn’t really what the book was about so his choice to not include this material is understandable.

At the time portrayed in this novel women were subservient to men while they walked behind their men not next to them the culture allowed for these same women to keep their family names after marriage. An interesting juxtaposition.

Bi-racial children were not welcomed. One of the female characters is part Korean, part American. Though living in the birth place those who are Of Mixed Blood are bullied, and worse. It is difficult for us, in this multi-ethnic land to understand whole countries devoted to one group of people. The knowledge that someone’s offspring could not easily assimilate and would be shunned for the rest of their life is a sad commentary on the world in general and the individual in particular. That this culture makes invisible by means of ostracizing is the least offensive of the country’s methods.

Is the book perfect? No. There are a few minor issues but they are so small that they do not affect the plot. One issue was character names. I had to reread some passages to ascertain which Kim was intended and whether Dumbroski or Duchnowski was the character referenced. If there was a purpose in having characters identified so closely I failed to see it. It just confused me. I had to look back and forth a few times to see of whom he was speaking.

The other issue, again minor, is that there was at least one term that I do not recall being explained. Mr. Penczak though did a good job of getting a civilian and non engineering weapons specialist to understand the issues related to national security.

I found the book both entertaining and informative.