By Tom Duggan on August 30, 2013Comments Off on BREAKING….Armed Standoff in Methuen Ends Peacefully 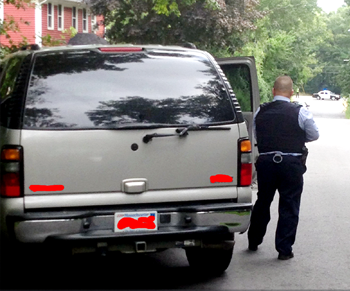 Methuen Police spent over an hour this morning on Lowell Street near the Methuen Armory (in the 700 block area) with their weapons drawn in an armed standoff with an elderly man whom his family said was suicidal. At the time of the standoff police were unsure if there was a family member in the house with the man. Police say the man had long weapons and handguns in the house, The NEMLEC Swat team was called in, but less than an hour into the standoff, and before SWAT could arrive, Methuen Police were finally able to communicate with the armed suspect by phone. He then surrendered peacefully

Police are searching the man’s home now as we post, he is being taken by ambulance to a local hospital and sources say he is expected to be held for psychological evaluation before any charges will be filed.

Methuen Police Chief Joe Solomon said that he appreciated the professionalism showed by the men and women of the Methuen Police Department and specifically thanked the Valley Patriot for withholding information during the armed standoff.

“I am very proud of the men and women of the Methuen Police Department. They showed today that their training and hard work in preparing for situations like this are tools that keep the public safe even during very difficult circumstances. This could have ended very differently and I credit the NEMLEC team and the all the officers involved.”