By Tom Duggan on July 23, 2015Comments Off on BREAKING…. METHUEN…. Multiple Shots Fired on Tenney St 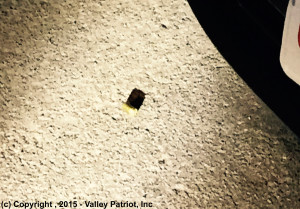 Methuen Police responded late Thursday night to a call of “shots fired”. When Methuen Police  arrived at the scene they found multiple shell casings on the ground. Witnesses say that two kids were seen  fighting in the street when one shot at the other multiple times. Police cannot find a victim and there is no word if the intended target was hit.

Police are combing the area and believe that the two people seen running may be near Phillips Street on the back end of Tenney, or may have entered a home near the shooting.

Shell casings littering Tenney street were from a 9mm, semi automatic weapon. Methuen Police Chief Joe Solomon says that they initially waited for the K9 unit from the Essex County Sheriff’s Department to arrive before touching the shell casings and tagging them for evidence. Once the K9 unit arrived police began a search of the neighborhood for teh shooter and the victim. The Lawrence Police have sent two units to investigate the shooting.

CHECK BACK FOR UPDATES AS WE GET THEM!