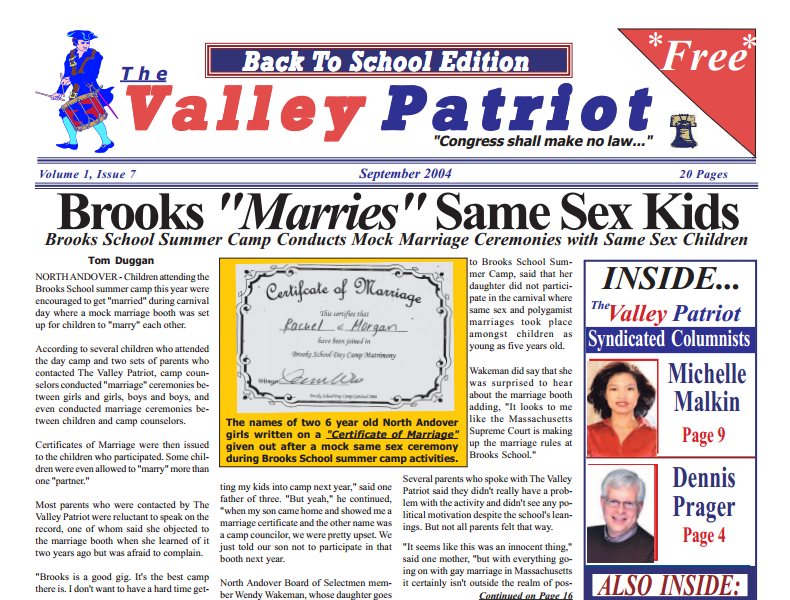 NORTH ANDOVER – Children attending the Brooks School summer camp this year were encouraged to get “married” during carnival day where a mock marriage booth was set up for children to “marry” each other. 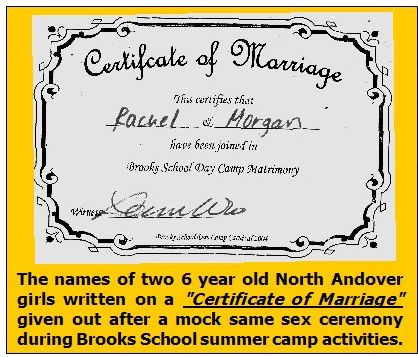 Certificates of Marriage were then issued to the children who participated. Some children were even allowed to “marry” more than one “partner.”

Most parents who were contacted by The Valley Patriot were reluctant to speak on the record, one of whom said she objected to the marriage booth when she learned of it two years ago but was afraid to complain.

“Brooks is a good gig. It’s the best camp there is. I don’t want to have a hard time getting my kids into camp next year,” said one father of three. “But yeah,” he continued, “when my son came home and showed me a marriage certificate and the other name was a camp councilor, we were pretty upset. We just told our son not to participate in that booth next year.

North Andover Board of Selectmen member Wendy Wakeman, whose daughter goes to Brooks School Summer Camp, said that her daughter did not participate in the carnival where same sex and polygamist marriages took place amongst children as young as five years old.

Wakeman did say that she was surprised to hear about the marriage booth adding, “It looks to me like the Massachusetts Supreme Court is making up the marriage rules at Brooks School.” 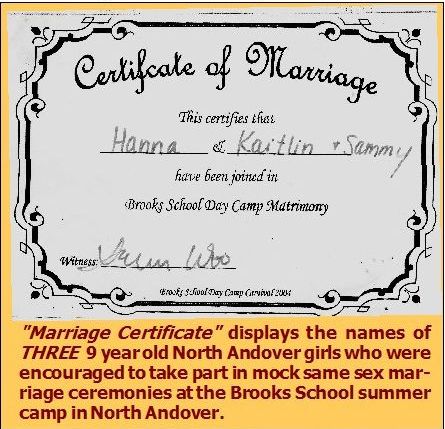 Several parents who spoke with The Valley Patriot said they didn’t really have a problem with the activity and didn’t see any political motivation despite the school’s leanings. But not all parents felt that way.

“It seems like this was an innocent thing,” said one mother, “but with everything going on with gay marriage in Massachusetts it certainly isn’t outside the realm of possibility that this was an attempt by someone at the school to indoctrinate the kids on the acceptance of gay marriage. It is a very liberal school and they should be keeping their politics to themselves.”

Many of the parents contacted had no idea this activity had taken place despite the fact that this was not the first year Brooks School Summer Camp had held a marriage booth at the carnival.

“At the beginning of the summer we got a list of activities our children would be involved in,” said one shocked mother, “a marriage ceremony was nowhere on that list. I have a problem with the whole idea regardless of the same sex issues. Actually, I support gay marriage. I have a problem with any marriage lessons conducted by a school or a camp. These kids are just too young for this, whether it is same sex or not. We send our kids to camp to learn swimming, tennis and arts and crafts. Issues like marriage are something for parents to deal with.”

Workers at the Brooks School Camp have since said that only one parent complained about the marriage ceremonies, but it did cause them to reevaluate the appropriateness of the “marriage booth.”

Brooks school officials say, based on the one complaint they received, that they have decided to discontinue the activity in the future.

Most parents who spoke to The Valley Patriot (off the record) said that they were happy to hear the news that Brooks has discontinued the practice and hope that the issue will not reflect negatively on the school.