By ValleyPatriot on June 29, 2015Comments Off on Call Down the Moon – A BOOK REVIEW by Susan Piazza 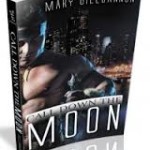 “Call Down the Moon” Soulmate Series Book 1 by Mary Gillgannon Published by: The Wild Rose Press 2014 through their First Faery Rose Edition Genre: Reincarnation / Time Travel Available in both Tablet and Paperback Rating: 4.5 bookmarkers out of 5 for writing. Some violence. Some sexual content.

Connar, a prince, and Aisling, a healer, fall in love in Ireland in the ninth century. Circumstances, prejudice, and fear lead to a tragic ending in that lifetime. But Connar is unwilling to lose the love of his life. He conspires with Siobhan, Aisling’s sister in that former life, to find her and reunite with her. A sword and magic transport him to present day

Denver where he awaits the reunion.

This could have been just another time travel book of which there are soooo many but Mary Gillgannon weaves many elements into her story. She blends The Society of Creative Anachronism and their involvement with Medieval Fairs and the Wiccan Religion and their covens very effectively. These additions add a deeper dimension to her work.
The way she turns a phrase is lyrical. I am a voracious reader and she is one of the better word arrangers I have read. She has a definite flair with words. An example is on page 40, “The green of his eyes had turned stormy and wild. She felt herself fall into the rolling sea of his gaze.”

I loved this book! Spent a few foggy days; instead of sleeping I read. I could not put it down. This actually presented a problem. I found several editing mistakes.

Though her writing was great the editing was not. There were several sections that were repeated and not at the beginning and end of the book where it would not be obvious. They came only a chapter or so apart (actually about twenty pages apart). Several sentences were exactly as they were written pages before. In another part she used a contraction for “didn’t” whereas in the prior section she did not but it was verbatim otherwise oh, except for that earlier “and” in the middle of a sentence.

SPOILER ALERT: Then there was an issue at the end of the book. Page 261 has Siobhan and Megan vanish after dying. The next paragraph has Barbara’s body disappear after she dies. “Almost immediately after the three women had vanished, Rowan had taken charge.” The next part has the women of the coven going back to perform a cleaning ceremony “before burying Barbara’s body”. Huh? What body, the one that disappeared? The fourth paragraph has them returning to the stone circle only to find that Barbara’s body had vanished. (I thought it vanished two paragraphs before!) The next page tries to explain why the coven women could not find the body. Again, huh? The three bodies vanished while the coven was there and before Rowan took command.

How were these mistakes not caught?

I read this book twice, once for pleasure, once to focus on the review. Even with the flaws I enjoyed this book immensely. The story ended well and left room for a couple of different spin offs. I’ll let you know how the next book in the series goes when it comes out. Hopefully the editorial problems will be fixed by then.