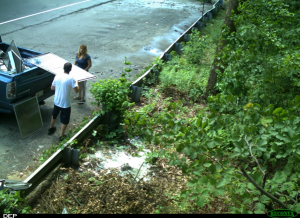 BOSTON – Two Revere residents are facing criminal charges stemming from flagrant illegal dumping and the shattering of large quantities of glass in the Melrose section of the Middlesex Fells Reservation, a heavily-travelled recreational area.

Yvonne Rhodes of Revere was identified after being captured on surveillance cameras that had been installed in public spaces to deter illegal dumping. Rhodes and Jason Carangelo, also of Revere, were indicted on charges of illegal dumping and receiving stolen goods.  Both were arraigned this week in Malden District court.

“For years, illegal dumpers have left taxpayers with the cost of cleanup. But through MassDEP’s collaborative work with other state agencies, and with our law enforcement partners, the tide has turned on these scofflaws, and those who once acted with impunity are being held accountable,” said ESF Director Pamela Talbot. “In our experience with this initiative, no one illegally dumps again after getting caught by our hidden cameras and brought to justice.”

“I applaud state investigators for taking the initiative to develop the Candid Camera Initiative,” said Middlesex District Attorney Marian Ryan. “Video can be a great help to law enforcement in apprehending individuals and in seeking to bring suspects to justice in the court room.”

Since 2006, ESF’s Candid Camera Initiative has identified more than 100 illegal dumpers across the Commonwealth, many of whom were subsequently fined and, in many cases, brought back to clean up their mess.

DCR Rangers Kathyrn Ward and Mike Bruce reached out to MassDEP ESF to help deal with illegal dumping occurring in the Middlesex Fells Reservation. On July 28, 2014 and again in early August, surveillance cameras stationed in the park captured the pickup truck, license plate and clear images of the defendants pulling in to the public park site, dumping the glass panes, smashing the windows and quickly leaving the area.

“Illegal dumping on state property not only costs the taxpayers to clean and remove, it can also cause significant damage to the health of our parks and forests across the Commonwealth,” said DCR Commissioner Jack Murray. “I thank our colleagues at the Department of Environmental Protection for their efforts to protect our parklands and open spaces.”

In addition to partnering with MassDEP on the Candid Camera Initiative, the DCR runs Massachusetts Park Watch, a statewide program that works with volunteers to report dumping, vandalism, fires or other suspicious activities in and around park areas.

Sergeant Eric Baldwin of the MA Environmental Police and Tim Dame of MassDEP’s ESF were instrumental in the investigation of this case.