By ValleyPatriot on November 2, 2014Comments Off on CBS’ Scorpion is Action Packed, and Lots Of Fun ~ TV Talk with Bill Cushing 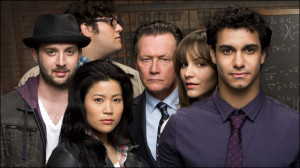 CBS’ new action-packed series, Scorpion, about a group of geniuses recruited by US Homeland Security to help them solve various crimes, requires some suspension of disbelief, but is really a lot of fun. The show is loosely based on real life genius Walter O’Brien, played in the show by British actor Elyes Gabel. O’Brien is described on the show as one of the four smartest people in the world, with an IQ of 197.

The series opens with a young Walter being arrested by federal agent Cabe Gallo (Robert Patrick) for hacking into NASA, and is recruited to work for the government rather than go to prison. We next see Walter 20 years later, having started his own company with a team of geniuses, and struggling to make ends meet. The team receives a visit from Agent Gallo, now working for Homeland Security, and is asked to help prevent 56 planes from crashing in Los Angeles.

While fixing the wireless internet connection in a local diner, Walter meets Paige, a waitress, played by former American Idol, Katherine McPhee. She has a son, who the group soon finds out, is just like them and has an instant connection with Walter. The diner would later become the group’s base of operations for the mission because of its strong wireless connection.

Walter and his team attempt to hack into to the FAA to fix the bugged software that is causing the problem with the airplanes. The episode’s climactic scene features Walter and Paige in a sports car traveling 200 MPH while a jumbo jet flies 10 feet about them as they race down the runway. The scene, while not very believable, is quite intense and well done.

The team, after successfully completing their mission, are offered jobs working for Homeland Security. Walter also extends the invitation to Paige to act as a sort of liaison between the team and society due to their social awkwardness. In this day and age of lots of heavy dramas, it’s nice to have a show that’s a little different. A show with humor, great action sequences, and a likeable cast.
Think of Scorpion as The Big Bang Theory meets Die Hard. It premiered on September 22nd to 13.8 million viewers and looks well on its way to being a success. I definitely recommend that you check it out. Scorpion airs Mondays at 9 on CBS.