By ValleyPatriot on November 22, 2019Comments Off on CBS’s ‘The Unicorn’ Is The Fall’s Best New Comedy ~ TV TALK with BILL CUSHING 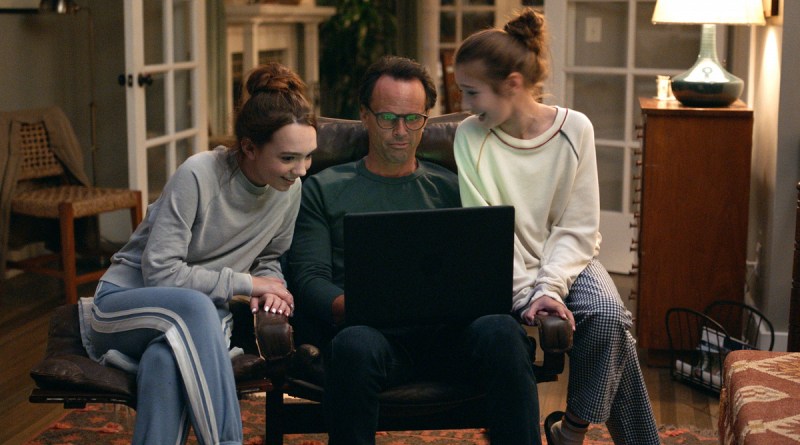 The best new network comedy of this fall TV season is the charming and delightful CBS series ‘The Unicorn.’ A unicorn, in this context, is defined as “that elusive creature that all single women are looking for.” Which is a widower and a father who, because he’s only had sex with one person for the last 20 years, is considered “factory fresh.”

“The Unicorn” in this case is Wade Felton, played wonderfully by the always amazing Walton Goggins. When we first meet Wade he has been mourning the loss of his wife for a year. He and his two daughters have reached the stage of acceptance, and seem to be coping, but not exactly in the best ways. There are dogs on the counter, and dinners are being selected from the slowly dwindling pile of casseroles stashed in the freezer by friends and neighbors after the death of Wade’s wife. All of this makes Wade see that it’s time to move on to the next phase, to start participating in life again. So he begins to consider the idea of dating again and what it would mean to welcome a new person into his life.

All of this happens in the first 5 minutes of the first episodes. This is a great creative choice. We get to meet Wade and his kids well into the grieving process, and well after the shock has passed. After all this is a comedy, and it’s not about grief or recovering from a loss. It’s about moving on and enjoying life again, even when the loss lingers.

What surprised me most when watching ‘The Unicorn’ is how heartfelt and honest it can be at times. Remember that not only has Wade lost his wife, but he is also now dealing with being a single dad to two daughters. The show really handles these situations right. Wade isn’t always the perfect father, but his love for his kids and his optimism in life are really touching and sincere.

A terrific support cast helps a lot too. The show’s adolescent co-stars, Ruby Jay and Makenzie Moss, are well-cast and have a chemistry with Goggins that brings out his paternal charm. Rob Corddry, Omar Miller, Maya Lynne Robinson, and Michaela Watkins play Wade’s supportive group of friends and they are all terrific in each of their respective roles.

Goggins, however, is the real attraction here. His performance is the shows strength. Often typecast in villainous roles, he rarely gets the chance to play someone you could describe as delightful or even likable. Here, he does both, and does it extremely well. With his recent performances in shows like ’Vice Principals,’ and ‘The Righteous Gemstones’ and past roles in classics like ‘The Shield,’ and ‘Justified,’ he has really cemented himself as one of the best actors on television. With ‘The Unicorn’ we get to see a whole new type of role for him.

Created by Bill Martin and Mike Schiff, the team behind ‘3rd Rock from the Sun’ and more recently ‘Trial and Error,’ ‘The Unicorn’ is a thoughtful and sweet sitcom where the point isn’t death, it’s life and living.