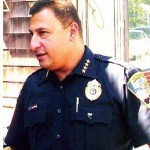 “Not only do you go through their rooms, in my opinion, but they’re driving, you look in their cars. You look in their glove box. And for me, I would look in their phones, and their computers, because most kids are writing notes or making plans in there. And what you see if you look around the country … most of the time after a school shooting you find a diary, or a book, or journal where they kept notes, and plans and drew pictures. So, as parents, if you want to be proactive? … look through your kids stuff!”

After getting a tip from a Methuen High School student last month that someone was planning a mass shooting at the school, Chief Solomon said that they conducted a search warrant and were able to arrest the student, having him held for a “dangerousness” hearing while they continued their investigation.

Solomon said that he believes the teen “absolutely had every intention on committing a mass shooting at Methuen High. We were very lucky just days before the Sandy Hook Shooting that we were able prevent what happened there.”

“There were some rumors going around that something was going to occur,” Solomon said.

“A girl actually had a conversation with the subject [Jacob Booth Maille] and during that conversation she became aware that this was absolutely his plan to do a Columbine-type strike at Methuen High School.”

“Threats to commit a crime of murder is a felony,” the chief continued. “So, its an arrestable offense, and therefore we were able to have the power of arrest to bring him in. We placed him under arrest and then conducted a search warrant. Some of the evidence that was located, that we’re not allowed to talk about, made me a bit alarmed. It was not weapons, but definitely, I believe, if we had an opportunity of coming close to [a mass shooting] occurring at Methuen High. I think this might have been the opportunity.”

IF YOU SEE SOMETHING SAY SOMETHING

“You know who really deserves an award? The girl who brought the information to us, she had the courage to stand up when she knew something was this important, and actually came forward. And she’s the one who absolutely, 100% should be receiving every single award and accolade. She’s the hero here. If it wasn’t for her coming forward to us, we wouldn’t have had the information. And if this was pre-Columbine, we probably wouldn’t have interviewed the suspect until the next morning when school started and that may have been too late.”

Solomon said he wants to “Encourage students to follow the role model of this girl,” encouraging students that if they see or hear something they need to tell officials right away.

“If someone says, ‘hey I’m going to kill so-and-so… even they are just mad and you’re not sure if they mean it, please report it. Let us look into it. We’d rather have the situation we had [last month] than the situation like they are dealing with in Connecticut today. I don’t think people realize how serious this was!”

Butze-Maille is being charged with threatening to commit murder, willfully communicating a threat concerning a dangerous item, and intimidation of a witness.

“The situation is extremely serious,” the chief said.

“I’m glad the courts and the District Attorney are taking this seriously. But, based on their evaluation of the charges and his situation, they decided that one of the charges should be withdrawn and that’s the terrorism charge, and we support the D.A. completely on that.”

Solomon said that he was relieved that the teen was not going to be freed and that his situation was continually being evaluated.

“It appears this case will remain in district court because the most serious charge has been nullified. We are working towards [finding out] what his motivation was behind all this. Once we are comfortable that we have an answer to that, then the decision will be made as to whether or not this is extremely serious, or just moderately serious.”

Police Chief Solomon says that gun bans will not stop school shootings, but there are things parents can do to prevent them from occurring: by being more aware of what their children are doing.

He says children living at home with their parents, even kids in their late teens should have no expectation of privacy and parents need to go through their rooms, read their diaries, cell phones, emails, etc. “As parents we need to be involved in what our children are doing when they think their parents are not paying attention.”

“That whole privacy issue,” Solomon said. “I look at it this way for the kids; the privacy issue at home is the same concept as ‘everyone gets a trophy.’”

“I’m so against that personally, where just for participating you get something! I remember crying at the end of the basketball or baseball season because we lost as kids. I remember getting to the final game and we came in number two. You absolutely have to know what disappointment is about. A lot of these kids don’t even know what disappointment is about, so they can’t deal with people making fun of them. They can’t deal with losing or disappointment. So, no I don’t believe that kids, even kids in their late teens should have any privacy from their parents.

Not only do you go through their rooms, in my opinion, but they’re driving, you look in their cars. You look in their glove box. And for me, I would look in their phones, and their computers, because most kids are writing notes or making plans in there. And what you see if you look around the country, even internationally, most of the time after a school shooting you find a diary, or a book, or journal where they kept notes and plans and drew pictures. So, as parents, if you want to be proactive? If you want to help your child who may be involved in something like this themselves…. and stopping them from committing suicide at the end, or going to prison for life, if you want to help prevent another family from having to live with this trauma, look through your kids stuff!”

“I don’t see that as an invasion. You know what? When they get to be 18 years old, and they want their own privacy, go rent yourself an apartment. We’ve done our job to bringing you up.”

“If you want to live in my house then you have a reduced expectation of privacy. Parents need to understand this. Their children are not their friends. Giving them privacy doesn’t make you a good parent. Searching their rooms and their iPhones and their emails makes you a good parent, because it means you care enough about them to want to protect them from their own bad decisions.”

Solomon said that the police and school officials are continuing to improve security at all city schools and that every effort is being made to ensure every student is safe at school.

“We need to continue our vigilance in the schools,” Solomon said. “I’ve met twice with superintendent on this, there are additional measures we are taking to ensure student safety in every school in Methuen. I am personally attending training with the Methuen School Officers to move us from where we are, to an advanced level of lockdown. When that is done, we will move the success we have already had with school safety, to the next level.”

For Daily news updates visit us on line at valleypatriot.com or our Facebook page: facebook.com/ValleyPatriot