By Tom Duggan on September 14, 2015Comments Off on Civic Group Protests Sewer Charges, Working with EPA Officials to Stop Corruption in Salisbury 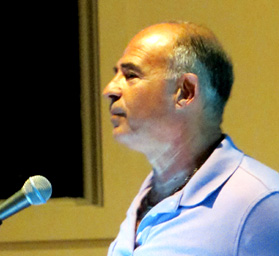 Salisbury beach residents say they are fed up with Town Manager Neil Harrington and the board of selectmen ignoring their complaints about the town overcharging for sewer and water. For those who only have property occupied at the beach during the summer, homeowners are charged for sewerage through the winter, even if no water and sewer is being used.

At the annual meeting of Salisbury Beach Citizens for Change, president Tom Saab said that his organization is not only fighting to change the way the town gouges beach residents for sewer charges, but is also working with the EPA to enforce the terms of the multimillion dollar grants the town received from the federal government when they built a new sewer plant.

“Everybody knows your sewer rates went up in January. [They] went up 33%,” Saab told the crowded hall on the Pavilion. “We went, spoke, and we fought, we begged. Paul Magliocchetti, our attorney was with us, as well as many others, we went to the preliminary meetings and we spoke and we presented the statistics and we presented the fact that throughout the state of Massachusetts (with 351 cities and towns) only 7% charged by the EQR (by individual housing units).

“We pleaded with them and said this is not fair and equitable …which the EPA requires. It’s not fair to charge us the way they charge us. It fell on deaf ears. They unanimously voted to raise the rates and to keep it being charged by EQR (charging each home by individual housing units). Which again, is not a fair and equitable system. Paul Magliocchetti and Al Dawson spent three hours at the federal EPA headquarters in Boston three weeks ago. We went through files upon files of the Salisbury sewer grant program from years ago, starting in the 70s. And we found this letter and here is a summary of what we found:

“‘On December 23, 1992 after review of the sewer user charge system in the town of Salisbury by the EPA engineer, Mark Malone, the letter was sent by EPA federal grant administrator, Anthony Depalma, to then town manager Michael Basque, which stated that:

“‘The current method of charging for sewer use was not the best system in the town’s particular circumstances, therefore, we’ … meaning the EPA who gave to town $18 million, said, ‘therefore, we recommend that the town revise its user charge system, to one based on actual use.’”

“The town of Salisbury neglected to pay any attention to this. They probably just threw the letter in the trash.”
Saab said that when he talks to EPA representatives they tell him “look, when the EPA gives out millions and millions of dollars to a town or a city, then makes a recommendation, guess what, they follow the recommendation.’

“Those of you who have seasonal properties, who pull your meter out in September and October, and don’t put your meters back in until May and June, it’s not fair and equitable but you are being charged for those other eight months when no water and sewer are going through your property.”

Atty. Paul Magliocchetti, who represents Salisbury Beach Citizens for Change said that he wants the EPA to reopen the grant since the town refuses to conform to the conditions of the sewer grants given to the town so that residents will be charged for sewer based on their actual usage.

“I just don’t see how a town that spends $20 million upgrading a system, installing meters in every single home in the town, can say it is fair and equitable to not charge based on use. It doesn’t make any sense. But the town of Salisbury does that.”
“I am in the process of drafting a letter to Mark Spinale, making our case for the EPA to reopen the grant. If we can succeed in getting them to reopen the grants, they then will have the authority and the jurisdiction to oversee the town of Salisbury … the EPA and the federal government will have authority to look into what is going on here in Salisbury.”

Attorney Richard D’Agostino told the organization that he is working with Salisbury beach residents in what sounded like a possible class action against the town.

“There has been a betterment fee that is being paid, and has been paid by residents over the years. I have been approached by several residents, and looking at this just on the periphery, it aggrieves more than just several, it may aggrieve hundreds of you, maybe everyone. These folks feel like they have been aggrieved by the town and I just want to say that I am available in the back of the room. This is not to solicit business, this is an attempt to right a wrong here against the residents. I used to be the alderman of engineering in Lawrence, over 30 years ago. I ran the water and sewer department there. Enterprise funds are not to be raided as a ‘sneak tax’ to be used for the community. Equitable and fair is the standard, you are not supposed to be charged more than what a project costs (sewer project) and if the project didn’t cost the town anything you are not supposed to be paying for it. These are some of the things that we are going to discuss.”

Atty. D’Agostino said that anyone interested should contact him at dagostinolaw96@gmail.com
Next month Selectman Chuck Takesian defends the sewer betterment and says he supports sewer fees be charged by actual water usage.