By ValleyPatriot on March 31, 2021Comments Off on Crime Plummets in the Valley ~ Lawrence, Haverhill See Major Reduction In Crime

While it has long had the reputation as a crime plagued city, Lawrence Police say crime in Lawrence has decreased 32% overall in 2020. This included a fairly sharp decline in all major crime categories except for murder, which rose from four cases in 2019 to five cases in 2020.

This marks another record year for the Lawrence Police Department Lawrence Police Chief Roy Vasque told the Valley Patriot, adding that crime reduction has been consistent for the past three years.

“The Lawrence Police Department has now seen 3 consecutive years of historic 20-year lows in crime starting with 2018 vs. 2017,” Vasque said in an email to the Valley Patriot.

“Just as impressive is our clearance rates in these crime categories, which are all at, or well above the national average.”

When asked what the police department has done to achieve crime reduction in the community, Vasque had a range of answers. He noted the impact of placing more officers on the street and the diversity amongst those officers.

“The Lawrence Department is now the only Minority Majority police department in the Commonwealth. We feel as though this, along with our strong commitment to working with the community, is a big factor in helping crime reduction.”

Vasque also credited a recent implementation of a city-wide camera project for the police department.

“[The camera project] not only helps in deterring crime, but is a big factor in solving all crime quickly…With the help of our camera system, technology advancements, training, and partnership with the community, we are able to get those responsible for crime off the streets before they commit other crimes.”

Another area of improvement can be found in the number of domestic crimes, which stands at its lowest since 2017. Due to COVID-19 keeping a large number of people at home, it may be surprising to some that domestic crimes have decreased, but Vasque maintained hope that this decrease is due to the good will of the community and the efforts of the department.

“My hope is that domestic violence is truly down for other reasons and not because victims are afraid to reach out for help due to the pandemic and are living with their abusers. We have made an effort through our Domestic Violence Unit (DVU) and social media to try and get the word out that help and resources are still available.”

When asked how the pandemic has affected the handling of crimes, Vasque said, “there has been and continues to be a big push to acquire PPE (Personal Protective Equipment) for our officers, and we are constantly updating our policies and procedures as the latest state and national guidelines change.” 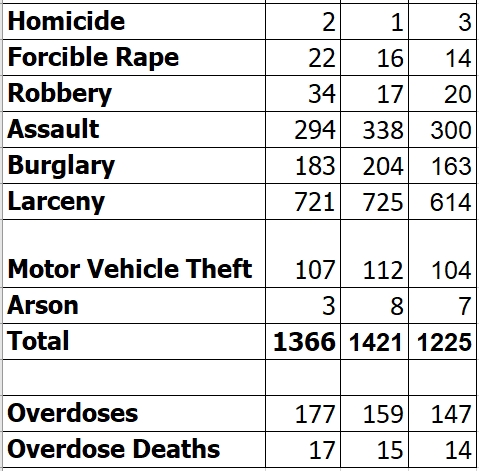 Meanwhile, Haverhill has also experienced a reduction in crime, as well as reductions in the numbers of overdoses and overdose deaths. Overall, crime has dropped by 14% in the community.

Categories of crime that have shown a decrease in 2020 include assault, burglary, larceny, motor vehicle theft, and arson.

In a recent phone interview with the Valley Patriot, Haverhill Police Chief Alan DeNaro declared that the decrease in crime has been a pattern for the past decade. Despite a few spikes in some years, including in 2019, Chief DeNaro maintained that crime has been trending down and acknowledged several factors that have led to this pattern.

Similar to Lawrence, Haverhill Police utilizes a camera project to deter crime. However, this project was established 15 years ago. According to DeNaro, other local communities considering similar projects in their cities/towns turn to Haverhill’s police department for guidance in setting up theirs.

DeNaro also said that COVID-19 was partially responsible for some of the decline in certain crimes.
“Some of [the decline] can be attributed to COVID. For instance, burglary is down, because people are at home, and criminals are less likely to break into houses when residents are home.”

DeNaro says The Haverhill Police Department has not encountered any issues in acquiring PPE for its officers, as it always keeps a minimum of a six-month supply for all their employees.

Additionally, although DeNaro acknowledged the slight decrease in the number of overdose deaths, he warned of the ongoing presence of fentanyl in heroin and other illicit drugs.

“That’s the whole issue. All the heroin we are confiscating is almost 100% fentanyl.”

When asked what kind of resources the department is offering to citizens suffering from drug addiction, DeNaro pointed to the cooperation of local clinicians.

“Paid clinicians will ride with a community officer. Anytime there is an overdose or an overdose death, they will meet with the family [of the victim] and try to get the victim into a rehab program.”

Overall, DeNaro remained optimistic for the future of Haverhill, but acknowledged that the police department and the city have much work to do. Specifically, DeNaro insisted that the city must give the department the resources to hire more officers.

“Over 10 to 15 years, we’ve seen a steady reduction in crime. I’ve been a chief for over 22 years, and I see Haverhill in one of its strongest positions ever. I think crime is going to continue to trend downwards.”
“I will push the mayor to continue to augment the size of this department…We need more officers to properly police the area. We are hiring an average of less than one officer per year. In my opinion, that’s unacceptable. The police department needs the resources.”

“There’s been challenges financially as we’re moving forward, but we will continue to push for five new officers in the budget this year.”